Nowadays, Samsung is the only Android OEM in the market who still have faith on the (dying) genre of tablets. From flagship to dirt cheap ones, you can find them with the familiar ‘Galaxy’ brand name. Newer tablets also run One UI interface on top of Android Pie.

The ‘A’ moniker is strictly reserved for the budget lineup, whereas the Galaxy Tab S series is pretty much inline with the flagship Galaxy S and Galaxy Note family. Samsung even updated their newest top end tablet, the Galaxy Tab S6, with August security patch before retail release.

The 2019 edition of the bigger (10.1 inches) Galaxy Tab A was introduced in February without much media attraction. Samsung opted for a LCD panel and a laughable 2 GB RAM/32 GB storage configuration to cut the corners.

The underlying computation power of the tablet comes from a mediocre Exynos 7904 SoC. The battery capacity is quite large though – 6,150 mAh – which is enough to drive the LCD display for your binge watching.

Samsung launched both the Wi-Fi only (SM-T510) and LTE (SM-T515) models in India in June. They initially came with May security patch, but the August patch is now rolling out via OTA. Besides the significant bump in the security patch section, the Korean OEM also introduced a new bootloader (v2 instead of v1) with this software update. As a result, one can’t go back to previous builds – even after manual flash – after installing the OTA.

The LTE model in India got the same update with ASH4 build a few days ago, but Samsung is currently rolling out another OTA for different regional models. The associated build number is ASH6, which is available in various European and Asian countries. 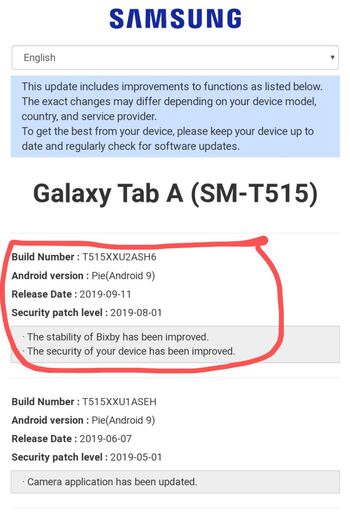 Probably the Bixby related changes are not included in the older firmware, but that’s just a speculation. The tablet may see Android 10 based One UI 2.0 update some day, but don’t expect it to arrive in this year. Perhaps during the launch of Android 11?