Today’s the day, as Xiaomi India is preparing to launch the third iteration of Mi Android One series, i.e. Mi A3, in the second largest market of the company. Judging by the hype around the previous gen Mi A series phones, the OEM will once again rock the mid-tier segment.

Even after Redmi’s separation from Xiaomi, the Mi A family grabs a large intersection of the target market segment occupied by Redmi Note series. In fact, Redmi Note 7 Pro is largely ahead of Mi A3 in terms of raw CPU performance, but don’t forget the AMOLED screen and pure Android on the latter.

Talking about the price, a leak was surfaced merely days ago regarding the Indian pricing of Mi A3. The figures listed there are actually less than the European price tag, which seems to be the indication of the cut-throat competition in this region.

Android One is all about speedy software updates (including regular monthly security patches), and Mi A3 is not out of the loop. During the early release in various European countries, the phone got its day-one update in the form of July security patch.

We also discovered that the company targeted to complete the rollout of the July patch before the second week of August, so that they could start working on the next build as soon as possible.

Now that both Mi A1 and Mi A2 got the August patch, Mi A3 should be next candidate in the roster. Well, both the global and the European variant is reportedly getting the update as we speak.

The size of the incremental OTA is approximately 280 MB, which is quite larger compared to similar OTAs for previous generation Xiaomi Android One phones. Unfortunately the official changelog won’t reveal much, but there should be a bunch of fixes inside this new update.

Indian Mi A3 units should receive the same patch as day-one update, or even some may get is as preinstalled out of the factory – but the version number should be different. Don’t worry, as we will track down every OTA and present them to our readers for easier sideloading.

Do not forget to watch the India launch event of Mi A3; the live stream can be accessed by clicking on this link.

The August update reportedly adds VoWiFi (of course a region-specific feature), and HD icon in the status bar for compatible SIM (as can be seen in the image below). 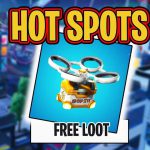 Fortnite Hot Spots: Where to find them in Season 10 Smash & Grab challenge