The Moto G series isn’t among the few privileged Motorola devices guaranteed to receive monthly Android security updates. Instead, Motorola pushes new updates to these devices after 60 to 90 days, which is why we get a little excited when any of the devices receives a new software update.

Just earlier this month, Motorola U.S. published a series of release notes for the upcoming Android security patches for the Moto G7 Play, G6 Play, Moto G6, G5s Plus, and Moto G5s, alongside Moto e5 Play. The update in question will install August 2019 security patches to the devices.

Motorola has also pushed the June 2019 security update to the Moto G5s Plus in India, which is a little older compared to the August patch being lined up for the U.S. variant.

In more recent times, we’ve also seen new June security updates targeting the Moto G7 Power and Moto G7 & G7 Plus outside the U.S. The Moto G7 Power in the U.S. has also been confirmed to receive August update in the coming days. In an attempt to keep models sold outside the U.S. up to speed, Motorola is now rolling out new updates to the Moto G6 Plus and Moto G6 Play in Europe. Reports are beginning to flow in with confirmations that July and June security updates are now available, respectively.

Owners of the Moto G6 Plus with the RETEU variant of the handset are now receiving a software update that installs firmware version PPWS29.116-20-8. This bumps the security patch level to July 2019. 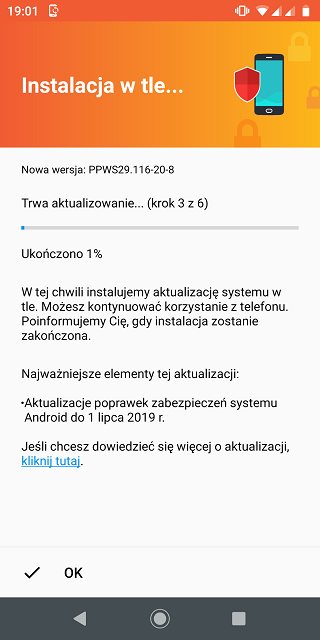 In addition to the updated security patch level, the new Moto G6 Plus update also fixes bugs and issues discovered in the previous update and improves the general performance of the handset.

For those who own the Moto G6 Play, the incoming update is arriving as software version PPP29.55-35-12 and unlike the G6 Plus, there’s more to the G6 Play update other than the new security patch level. Sure, digital wellbeing is part of Android Pie, but the Moto G6 Play missed out on the feature with the update to Pie. With the latest update to June security patch level, users of this device can now enjoy the services of digital wellbeing for a healthy digital life.

Since it has plenty to add to the Moto G6 Play, the update weighs over 600MB, so be sure to connect to a stable Wi-Fi network before attempting to switch to the new firmware.

After the update to Android Pie, some users of the Moto G6 series started reporting a bug that prevented users from disabling the ‘Hello Moto’ sound on booting the phone. So annoying is the issue that affected users have already found a workaround ahead of Motorola.

Whether this incoming update fixes the issue or not is still unclear, but it possibly doesn’t, otherwise, it would be part of the changelog. Of course, this is unless Motorola silently tweaked the software to enable this feature without going ballistic about it.

We will keep an eye on the update and let you know if it does fix the annoying ‘Hello Moto’ bug. Meanwhile, check out our other coverage on Motorola-related stuff here.

Next article Getting Facebook account blocked due to phishing while using Frost? Here’s what you should know

Previous article Yes, Patreon is down or offline currently (at least the website)