In last Friday, we concluded our daily dose of OnePlus related news with the info about open sales of the OnePlus 6T McLaren Edition via Amazon India on and from April 6. 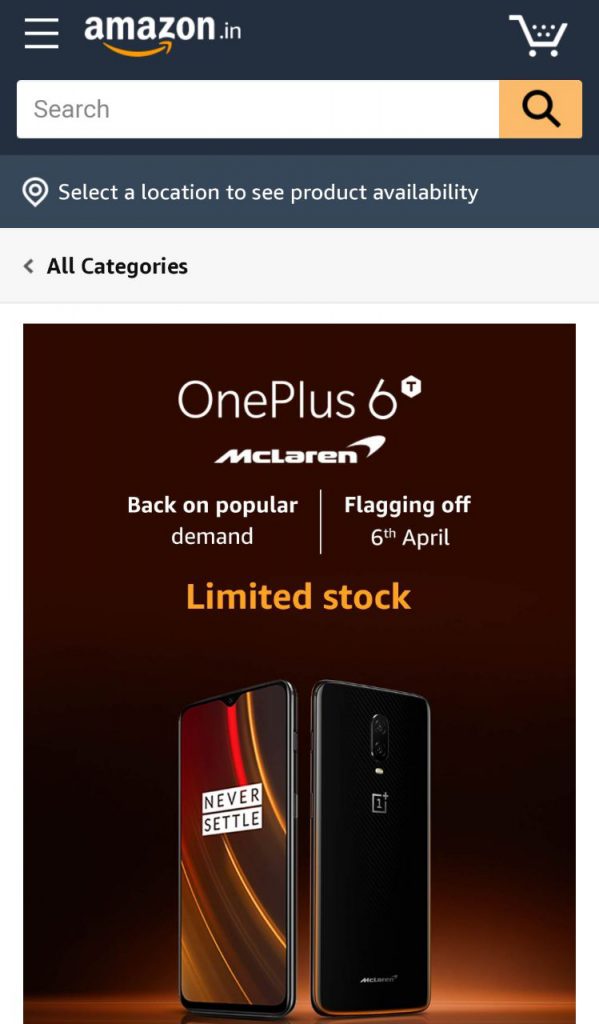 Well, it seems that the OnePlus team is trying to clean up the inventory as soon as possible – presumably for the preparation of the upcoming OnePlus 7. They have made it available via other channels such as OnePlus.in store as well as offline touch points.

Immerse yourself in power and speed. We once again bring you the #OnePlus6T McLaren Edition ?️

Remember, this is probably the last chance to get you hands on the limited edition McLaren OnePlus 6T. Looking at the history of OnePlus, they will eventually seize the existence of it and replace it with another one.

China and India are covering the major portion of the OnePlus sales. Thus it is very likely that the Shenzhen based smartphone maker is trying to get rid of the remaining stockpiles.

Everyone is preparing for the next OnePlus phone in their own ways. ?

Daily dose followers may recall that Slashleaks contributor Sudhanshu Ambhore shared a number of case renders of OnePlus 7 a couple of days ago.

Upon user requests, he has shared some annotated revisions of those renders. Check them out:

For those who are asking me about cutouts of the case for OnePlus 7.#OnePlus #OnePlus7 pic.twitter.com/kqG5L3ydQd

And yes, the SIM tray is actually placed beneath the phone this time.

He has further added that the speculative release date of the OnePlus 7 is May 11, although the news should be taken with a pinch of salt.

According to an unconfirmed Chinese source, OnePlus 7 would be released in early May and possibly on May 11.#OnePlus #OnePlus7

Meanwhile, OnePlus 3 and 3T users are getting really impatient about getting the official Pie update – whether in the form of a beta or stable build. Now that the Hydrogen OS Pie build is available as public beta for Chinese users, the global users become furious. I should start with the second one, which was pretty blatant IMHO. However, there was something else in that thread.

Do you have the smarts to figure out the hidden message in our Weekly Update?

An eagle-eyed OnePlus community member eventually deciphered the hint. In fact, it was right in front of our eyes. The screenshot contained the direct reference of “OnePlus 3/3T Pie”! Are they planning to roll out the first public beta this week? Cross your finger guys!

In another part of the community, Jess T. (OnePlus Graphic Designer) shared everything about behind the scenes with April Fool’s.

This year’s Warp Car is my third OnePlus April Fool’s campaign to date; I created visual assets for Dash Energy Drink and created the storyboard, and last year’s PeiCoin was the first global campaign I ever led.

Believe it or not, they even came up with this crazy idea to present the “ThanOS UI”!

This year, April Fools fell on my lap again and I led the campaign. We brainstormed for ideas in February. Ideas that got rejected were Warp Charge chocolates, red cable liquorice, a OnePlus Fyre Festival, Bullets Wireless for your pet, and a ThanOS UI skin.

Go through this crazy adventure by clicking here.

A lot of time went into creating this year's April Fool's campaign, so let's take a look at the creation of #WarpCar!

On the other hand, OnePlus CEO Pete Lau becomes genuinely curious about the usage of landscape mode. This time, he asked the following question towards global OnePlus fans:

Hey everyone, which apps do you most often use in landscape mode? ?

Got butterflies in stomach? Yes, cause he asked a similar question to his Chinese followers last week. Previously we speculated about possible button rearrangements in the upcoming OnePlus 7 based on Pete’s query. But looks like we are basically getting some hints about the rumored full screen display which should not need any notch related optimization.

Moving on, XDA Senior Member kacperes00 presented a fantastic app named FaceNotify for OnePlus phones. After installing the app, only you can see the notifications straight from your lockscreen by looking at it.

Combining Face Unlock with notification access, the developer has been able to replicate the iOS like feature on Android. The app is tested on OnePlus 5, 5T, 6 and 6T, although it may work on other phones as well.

With the release of 1.2 version, the app can work on non-rooted phones too. You need a give one time permission to the app via ADB though.