The Matrix franchise was one of coolest thing in my childhood. As a kid, it introduced me to the world of sci-fi, cyberpunk and a truckload of pop-cultures.

Remember the scene where Neo, one of the protagonists, was running to find a safe passage and the agents were chasing him? Neo’s colleague gave him turn-by-turn directions via mobile phone – perhaps that was the first incident of live location tracking experienced by me.

The rise of smartphones essentially made a number of gadgets obsolete. Dedicated navigational systems were one of them. The inclusion of GPS chipset inside cell phones eventually reduced the overall cost and brought the advantages to the masses.

FYI, the US made GPS (Global Positioning System) is not the only satellite-based radionavigation system. Russia has GLONASS (Global’naya Navigatsionnaya Sputnikovaya Sistema) while the European Union has Galileo.

China’s BeiDou and India’s NAVIC are some of the newer players in this domain. Collectively, they are called Global Navigation Satellite Systems (GNSS).

Some OEMs, like Xiaomi and OnePlus have rather questionable aGPS implementation in their smartphones. Interested readers should take a look at our articles on this topic.

Another approach to improve location accuracy is to use dual-frequency GNSS. In this case, the receiver can listen more than one radio signal from each satellites on different frequencies. For example, these are L1 and L5 for GPS.

Xiaomi’s Mi 8 was one of the first major Android flagships launched with built-in support for dual frequency GPS. Besides L1 and L5 for GPS, it also supports Galileo’s E1 and E5a.

Samsung is a pioneer in case of adopting cutting edge technologies. However, they allegedly decided to block dual frequency GPS support in 2018’s Galaxy S9/S9+.

Interestingly, some of the Exynos platforms do come with an integrated GNSS solution.

Back in 2017, Broadcom launched BCM47755 chip with multiple frequency support.

The BCM47755 supports two frequencies (L1+L5), and as a result, achieves lane-level accuracy outdoors and much higher resistance to multipath and reflected signals in urban scenarios, as well as higher interference and jamming immunity.

On the other hand, the Snapdragon 855 powered models received a peculier treatment. The SoC is itself capable of receiving dual frequency GPS signals. 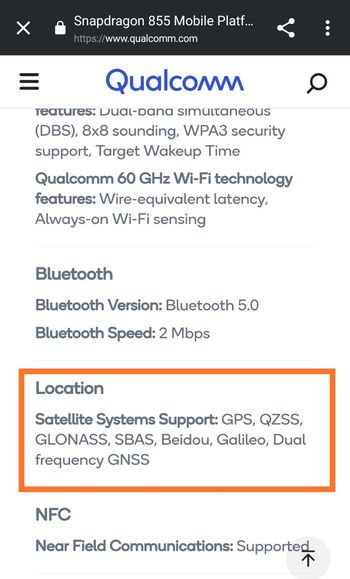 Nevertheless, only Hong Kong based unlocked Snapdragon models are reportedly able to catch dual frequency GPS signals, but not the US models.

Sean Barbeau, the author of the GPSTest app, is currently maintaining a comprehensive blog post regarding dual frequency GNSS support in Android phones. So far, none of the carrier branded US Galaxy S10 variants supports this feature.

I can unfortunately confirm no L5 signals on a US AT&T Galaxy S10+, SM-G975U. Holding out hope that a software update enables it in the near future!

We can’t find any logical explanation behind this strategy of Samsung. In theory, it can be possible to push an updated version of the location config (gps.xml) via OTA software update and enable this feature, but don’t take my words for it.

Trying to figure if the SGS S10 has a dual frequency (L1+L5) and RTK (5cm) capable GPS/GNSS receiver. All the reviews focus on screens and pixels and gigs of storage. The Snapdragon 855 seems to have that capability, but not all S10s will use that SoC. Waterpoof also important.

Google itself maintains a list of devices that support raw GNSS measurements as well as dual-frequency GNS, and the Galaxy S10 lineup is not even listed there.

Another reason to ditch the carrier branded phones, don’t you think?