The Android modding community really admires Google Camera ports. Thanks to the developers for their countless hours of reverse engineering, users can enjoy Pixel exclusive features like HDR+ and Night Sight on their non-Google phones.

It can be theoretically possible to sideload regular Google Camera on any Camera2 API supported phone. But in reality, it is not that simple.

Google Camera heavily relies on underlying hardware components and software based post-processing. To port it on a random device, developers need to decompile the app and manually tinker with the preset values to adjust them.

That’s why it is very hard to come up with one-APK-to-rule-them-all. Celso Azevedo, a datahoarder, maintains a page for various Google Camera ports. He describes the situation in a pretty good way:

This is not the typical app you find in the Play Store. There are no “universal settings”, some phones support all features while others don’t, it’s stable on some phones but crashes on others, and it’s updated regularly.

In order to improve photo quality, unlock new features, fix bugs on their phones, supporting new ones, etc, developers have to share their apks. Users are then able to test and provide feedback. Some of these versions work, some don’t. Some are better than others, and that’s why it’s important to be part of a community where everyone shares their feedback.

Don’t be scared of the jargons – the community is making a great progress since the inception of this mods. All you have to do is consult a little with fellow users of the phone and install the most compatible mod.

Now a redditor (u/luke1333) has got their hands on newest Galaxy S10 and S10+ and experimented with GCam ports. And surprise! It just worked!

Galaxy S10/S10 Plus works great with GCAM!!!! from samsung

The testbed is a Snapdragon 855 variant of Galaxy S10+, which is intended for the USA, Latin America and Chinese markets. According to the guy, he has installed this mod by Arnova8G2 (MGC_6.1.021_BSG_Arnova-based_v.1.3c_fix_TlnNeun_xcam_5_beta6.apk).

This one is already known to be compatible with Samsung Galaxy S9 and Note 9 Snapdragon models. You have to make sure that viewfinder format is set to YUV_420_888 under Settings => Advanced => FIX.

Google Camera with Night Sight for Note 9 from GalaxyNote9

Rest of the world will get the Exynos 9820 variant of S10. Historically Exynos models are less compatible with these ports, compared to their Snapdragon variants.

XDA Senior member IDan1109 is working hard to bring proper Exynos support with his own version of Google Camera ports. Right now, users may experience over-exposed photos as well as non-working Night Sight, but the amount of improvements are substantial.

Back to Galaxy S10+, the current Google Camera port is unable to detect the triple rear camera setup and falls back to the primary one. It should be fixed by the devs, when the phones will be publicly available and more users will participate in testing.

HDR+ and Night Sight are reportedly working fine. luke1333 has done this little experiment with store demo units in the ‘middle of afternoon’, so we are unable to observer a proper side-by-side comparison. The port should work on regular S10 and S10e models as well. For now, we need to wait for at least a week more, as the first pre-orders should be shipped by March 8.

XDA Senior Member cstark27, an avid GCam modder, has got a chance to tinker with Google Camera ports on Galaxy S10 US retail demo units.

GCam works on the Snapdragon models well, even with the wide angle from galaxys10

He has shared some pictures for comparison – check them out:

cstark27 has bought an unlocked Galaxy S10e, but unfortunately the wide angle lens is not working currently with Google Camera.

He has also shared S10 optimized settings for GCam ports, so that other users can enjoy the ports without messing with the configs.

Cross your fingers for a stable GCam mod for Galaxy S10 in near future.

The March 8 update allowed me to open the wipe angle one above. Seems to work okay though the viewfinder image is much brighter and washed out compared to the output.

cstark27 is aware of the it as well. He has updated the post accordingly.

Google Camera ports can dramatically improve camera performances. However, it is difficult to get them working on Exynos models, such as global Galaxy S10.

In this article, we highlight current development status of Google Camera mods on Exynos powered phones. 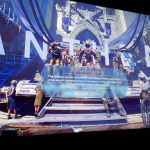