Around a month ago, OnePlus pushed a wave of Open Beta builds which became infamous bricking phones. The OEM forced to halt the rollout and pull back the faulty builds. Later on, OnePlus officially published a guide to recover the phones. In some cases, that was not enough for end users, so they were suggested to seek help from nearby service centers.

please contact the official customer service, the customer service is aware of this issue and they will help you flash the package remotely or you could also visit your nearest ESC.

Preliminary analysis at our end suggested that only OnePlus 5 and OnePlus 5T builds (Open Beta 26 and 24 respectively) were glitchy.

To second the conclusion, OnePlus re-released the identical update for OnePlus 6 and OnePlus 6T a few days later, but OnePlus 5 and 5T were kept on hold.

They eventually rolled out a set of completely new builds for OnePlus 5 and OnePlus 5T under the same OB26/24 moniker. This time, OnePlus included a precautionary tip in the changelog to ensure safety from unwanted consequences.

Merely a week has passed after that, and OnePlus is now rolling out a new set of Open Beta builds. Following the previous trends, both OnePlus 5/5T and OnePlus 6/6T are in the roster of eligible phones, while 3/3T users have nothing but speculations. 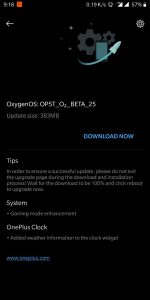 On the other hand, OnePlus 6 (Open Beta 13) and 6T (Open Beta 5) have got fixes for video calling, which is related to the recently announced Google Duo integration with OxygenOS:

– Fixed lag while setting an alarm

The official announcement threads for the updates are now live, so you can read the changelogs straight from the horse’s mouth – see here (OnePlus 5/5T) and here (OnePlus 6/6T).

The full zips weight about 1.6 to 1.8 GB (depending on phones). OnePlus also provides smaller incremental OTA zips, but we prefer not to share them for the sake of clarity.

Changelog for OnePlus 6/6T along with incremental OTA

FYI, these beta builds do not come with February security patches.

The stance is not actually surprising, as OnePlus usually prefer bi-monthly security patch updates. The next beta (or stable) update should comply with the upcoming March security bulletin.

Next article [Update: More hints] Before OnePlus 3 / 3T Android Pie update (9.0) there will be another Oreo OTA – company staff says