Along with the launch of Android 12, Google announced that they are working on a modified version of the OS that will be optimized for large-screen devices such as foldable phones and tablets.

Known as Android 12L, the tech giant released the Developer Preview in October and said that the stable version will be hitting markets in March of 2022. 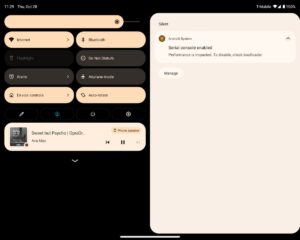 That being said, a few hours ago, Google released Android 12L Beta 2 for Pixel devices. Soon, users noted that the Show Touches feature was removed from screen recording.

And now, it looks like Google forgot to fix another issue in the newly released beta. Many Android 12L Beta 2 users are reporting (1,2,3,4,5) that there is a significant delay when transitioning from the lock screen to the home screen.

Users say that it is really frustrating since they are unable to use the phone right after unlocking their phone. While some reports suggest that the OS is stuck on a blank screen, others say they see their wallpaper for 5-10 seconds.

Here is what some of those affected by the bug had to say.

What type of Android issue is this?
Slow Performance or Hang

What did you expect to happen?
Snappy transition to home screen.

What actually happened?
Exaggerated pause between transition from lock to home screen

How often has this happened?
Every time

What was the effect of this issue on your device usage, such as lost time or work?
Extreme – device was unusable

Additional comments
When transitioning to home screen, touch input was not available. Depending on if app was open at time of locking, the screen displays the home background or a black screen.
(Source)

But with Google yet to comment on the delay experienced when transitioning from the lock screen to the home screen on Android 12L Beta 2, it is still unclear if and when the bug will be fixed.

We hope Android developers soon find out the root cause of the issue and fix it as soon as possible. Nonetheless, we will be keeping an eye out on the matter and update this space as and when required, so make sure you stay tuned.

In the meantime, make sure to check out our Android 12 bug tracker to see which issues are currently affecting users.