Earlier this year, OnePlus updated its flagship lineup and released the OnePlus 9 and OnePlus 9 Pro. Running Android 11 with OxygenOS 11 on top, users appreciate the phones because of their intuitive and clean interface.

Recently, OnePlus updated the devices to OxygenOS 12 based on Android 12. However, users expressed their frustration over OxygenOS’ resemblance with Oppo’s ColorOS. Many said that the software experience is lacking with the update also removing some existing features.

Some even said that they are thinking of ditching OnePlus because of the very reason. Now, reports (1,2,3,4,5) are coming in that OxygenOS 12 is showing incorrect CPU information.

According to users, the About phone section says the OnePlus 9 and OnePlus 9 Pro are powered by Qualcomm Snapdragon 855 instead of Snapdragon 888.

On further investigation, we found out that the bug was also present in the beta builds with many now confirming that it has made it to the stable release. You can also see in the image below how to the About Phone section looks like after updating to OxygenOS 12.

We got downgraded to a 855, yo! I blame the Android 12 update and ninjas. Go check, under About Phone setting. I’m using a OnePlus 9. RIP Snappy 888
(Source)

While this does not affect the user experience in any form, people say multiple issues like these were reported and even acknowledged during OxygenOS 12 beta. And with bugs like these making it to the stable release, owners say this indicates that OnePlus is pretty much on a backward trajectory in terms of software.

That being said, the developers are yet to say anything about the issue making it to the stable version of OxygenOS 12, it is still unclear if and when it will be fixed.

We hope they soon release an update that fixes the OxygenOS 12 incorrect CPU bug issue. When they do, we will update this space to reflect the same so make sure you stay tuned.

In the meantime, you can check out our dedicated OxygenOS 12 bug tracker to check which bugs are currently affecting users. 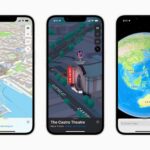 Apple Maps voice instructions (navigation) not working on CarPlay with Bluetooth after iOS 15 update, but there's a workaround