Android is an extremely diverse operating system with hundreds of variations available across the market – some so different from stock Android that it gets hard to believe that they’re based on AOSP.

Nonetheless, even after all that heterogeneity, the OS is easily identifiable by a set of common apps. We previously highlighted how more and more OEMs are dumping some of their stock apps in favor of their Google counterparts. Due to this, certain bugs arise every once in a while that affects the entire Android tech space. And one of these is the recent spike in app crashing issues reported by users across several OEMs.

Unfortunately, Xiaomi was one of the badly hit ones too, and its users have recently been taking to forums and Twitter to report ‘apps keep stopping‘ issues – particularly with a system service called MSA.

An annoying error message keeps popping up every now and then saying that “msa keeps stopping”. This happens upon trying to open a set of commonly used apps including the likes of Gmail.

Hi I am not sure what this msa is, is this an app you installed perhaps?

Due to this, many apps have been rendered unusable.

Nonetheless, it is worth mentioning here that Google has already acknowledged the bug, at least with Gmail, on the Google Workspace status page. The company recommends using the desktop interface until issues are resolved.

Not exactly the best of solutions since it doesn’t really solve the problem.

But thankfully, Xiaomi has now issued its own official workaround for the issue following which the problem should completely disappear. The bug has been identified as being a part of the latest Android System WebView app that comes bundled on every Android device. For those unaware, Android System WebView is a piece of software that helps other apps on your device to display web content, without having to open a dedicated web browser.

Anyway, since the issue has been identified as being a part of the latest WebView app update(s), the solution is rather simple, if you haven’t guessed it already. 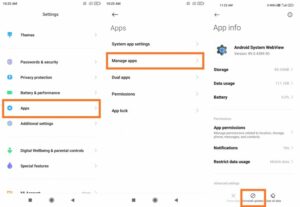 Xiaomi also recommends doing the same for the Google Chrome browser. So if you continue facing crash issues even after the above, then you may follow a similar series of steps for Chrome as well.

This should immediately stop the “MSA and other apps keep stopping” issue on your Xiaomi device. Hopefully, Google will sort the mess at their end soon.

Additionally, you can also disable auto-updates for the aforementioned apps so that they do not automatically update to the newer broken versions.

03:22 pm (IST): The issue has finally been resolved with the latest updates rolled out to WebView and Chrome apps. This is clear from recent updates to Google Workspace Status and the tweet below:

10:47 pm (IST): If you continue to face crash issues even now, then the most likely reason is that your Chrome and WebView apps have not been updated automatically. In such a case, you might want to head over to Play Store > My apps & games and check for updates. Steps still not clear? Then check out the video given below:

12:04 pm (IST): If the Android WebView update doesn’t show up for you for some reason, then you can also perform a manual installation through this link, as the following forum mod has advised: 02:25 pm (IST): Some users aren’t able to update the Android System WebView and Google Chrome apps on their devices as the update remains pending in the Google Play Store. Head here for solutions to fix the issue.

12:42 pm (IST): Google has now issued an official statement regarding the app crash fiasco triggered by a faulty update to the Android WebView app.

Aside from giving out the workaround already mentioned in this story, they have asked not to uninstall updates to the WebView and Chrome apps as it may lead to data loss.

Additionally, a manual update of WebView or Chrome may fail to complete. To resolve this, simply clear the data/cache of the Google Play Store app.

01:35 pm (IST): Gmail support now says that if the crash issue continues despite updating, then users have to restart their unit. 11:24 am (IST): It now appears that the issue isn’t limited to devices running on Android 10 and Android 11. This has also affected devices on Android 12 Developer Preview.

However, the positive bit is that Google has fixed this issue in the Android 12 Developer Preview 2.1.

Just in case you’re trying to figure out why the Google app is crashing on your Xiaomi unit, you can read our coverage on the matter by heading here (workaround available).

Next article [Updated] Google Discover (or feed) not working or crashing & can’t open articles after recent update? You’re not alone (workarounds inside)