Nokia seems to have finally learned the lesson and is now working tirelessly to make up for past mistakes.

After the initial plans to release the Android 11 update in the first quarter were altered, Nokia officials clarified that they are aware of the delay.

The company ensured that Android 11 updates for many devices will be pushed this month. And just as we predicted, a notification has gone live for the Nokia 2.2 right in time.

Nokia, in an official post, has announced that they’ve begun the Android 11 rollout for the Nokia 2.2 units.

The update is rolling out like a tracer bullet and has already reached the Nokia 2.2 handsets.

This being an Android One program device, the changelog is expected to bring every feature that vanilla Android 11 has.

Nokia had initially planned to release the update by the end of Q1 2021 but releasing it 12 days post the deadline isn’t too bad either.

The update is planned to roll out in the typical wave fashion that Nokia follows. The update will be first releasing for the states in the first wave, with the rest coming in the second wave.

So, if you are a proud owner of Nokia 2.2 and belong to one of these countries, then you will be receiving the Android 11 update either immediately or in the coming days.

The good news is that the update has finally been released with a minimal delay. This goes on to show that more Nokia devices are also on the way, an announcement could go live any time from now.

Brace yourself for more exciting news in the upcoming days. Be sure to subscribe to our dedicated Nokia Android 11 update tracker to keep track of the latest developments.

IST 09:00 am The Android 11 for this device is rolling out full-fledged as even the download links are out if one doesn’t wish to wait for the OTA. 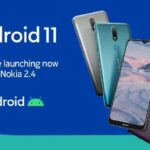