Google Meet helped to connect a lot of people during the pandemic and continues to do so even now.

While the Google Meet Android and iOS apps received several upgrades lately, the web app missed out on a few. Now, the Google Meet web app version is also slated to get a bunch of improvements in the coming months.

Among them, the exposure auto-detection feature to adjust brightness and improve visibility on Google Meet.

This feature came out for the Google Meet mobile app last year and used artificial intelligence to adjust video brightness.

Since this feature was missing on the Google Meet web app, users were facing difficulties in low-light conditions.

Also, the feature is said to improve visibility and adjust brightness when an overexposed scene is detected.

Google has announced that the said feature will roll out to all Google Meet users in the near future.

Light adjustment will be rolling out to Meet users everywhere in the coming weeks.

This is good news for users as they can now hold meetings without worrying too much about their environment being too bright or dark.

Apart from that, Google Meet users will also see a new design, Autozoom, Data Saver, and backgrounds on the web and mobile apps.

Google Meet is among the most used video-communications services so it is only natural for Google to enhance the user experience with such improvements. 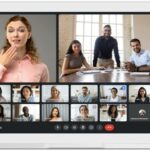