[Updated] Apple’s iOS 14.2 update disables option to turn off headphone safety setting for some users & it’s allegedly not a bug

Users are now unable to increase their volume levels beyond a certain point with the onset of iOS 14, and not everyone is happy with this restriction.

This is clear from the fact that there have been plenty of complaints owing to the same issue on the Apple forums. Some of them are given below.

I don’t have the option to turn off headphone safety notifications either. Mine states they cannot be turned off.
Source

With iOS 14, Apple had added a hearing feature to check real-time audio decibel levels via a new option in the control center, so that you can make sure that headphone audio levels are safe for your ears.

With such a feature already existing, the addition of a restriction where users can’t turn up their headset volume beyond a certain point feels a bit too much.

The restriction hasn’t gone well with iOS 14 users due to the fact that there is no option to turn the headphones safety off, even though Apple’s intention of its implementation was for their customers’ safety. 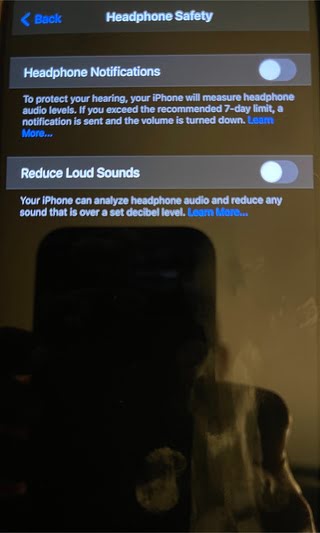 It appears that Apple had added this to conform to various regional laws. For example, in EU, there is a law in place that states that all personal music players and mobile phones sold in the EU must have a sound limit of 85 decibels (dB).

However, users are still allowed to increase it beyond the 85dB sweet spot, all the way up to 100dB.

Apple, though, decided to go a step too far by not giving users an option to raise volume levels beyond the safe levels, at their own discretion.

But if the restrictions were truly to adhere to regional laws, then why hasn’t it been universally applied?

My wife and I ordered our two phones ten minutes apart. They were both shipped to the same address and came from the same address. Hers has the option to turn off the notifications and mine does not. The only difference between our phones is the color. We both have 12 Pro Max 512gb running now 14.2.1.
Source

A few users have reported that they are missing the option to turn headphones safety off, while others in their household are having it, which is quite odd.

It also appears that this restriction has been quietly added with the iOS 14.2 update. This hasn’t appeared immediately after the update for many, though. A factory reset after the update is required to trigger its imposition.

Apple just told me it is mandatory in the us. That all devices once erased and restored with 14.2 will have the same restriction. I’m not clear if they meant only 12 models so I’m going to test it on my 11 pro max and pro max and report back. So many users never saw this because their iPhone 12 series shipped with 14.1 and unless you install 14.2 and then factory erase your phone, which I did, you’ll still be able to turn it off. Yikes
Source

It is worth noting here that Android devices too have a similar check in place, wherein they notify users about unsafe volume levels upon trying to raise it over a certain limit.

And if users still feel that the volume is too low, they are allowed to increase it over that limit. Apple, on the hand, has removed such a provision.

This menu can be accessed via Settings > Sounds > Headphone Safety

If you are one of the users who can’t turn headphones safety off on iOS 14, then there is one thing that you can try.

In particular regions the regulations and safety standards do not allow the option to turn the notifications off. However if you go into the health application and go to hearing you can delete the data it has read, that enforced the limit on the volume. By deleting this data, your phone will have no reason to reduce the volume, you’ll have to repeat each time you reach the 7 day limit.
Source

Try this at your discretion, though, as listening to audio at high volumes can indeed damage your hearing and cause conditions like tinnitus.

Tinnitus is a medical term used to describe a ringing or buzzing noise that people can hear permanently in one ear, both ears or in the head.

The above workaround is also not guaranteed to work as we were unable to verify it.

If you are still dissatisfied about the fact that you can’t turn headphones safety off on iOS 14, then you can also give your feedback to Apple via this link.

That being said, be sure to check out our dedicated iOS 14 bug tracker for further coverage on issues like these.

12:10 pm (IST): Apple has officially mentioned that the option to toggle off the headphone notifications will not be available in certain countries due to regulations and safety standards that must be followed. Due to regulations and safety standards, headphone notifications can’t be turned off in certain countries or regions.

12:40 pm (IST): Going by what Apple support told one of the complainants, the ability to access the functionality in question depends on the iOS version the phone was shipped with. Here’s what the user shared:

I am in the US as well and can’t turn it off. Spent all day trying to get someone from support to give me a straight answer and “depending on what IOS your new phone was shipped on that’s what determines if you can turn it on/off”