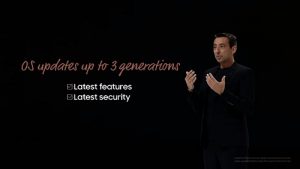 It appears that Samsung has released a fix for the touch screen issues on the Galaxy S20 FE (Fan Edition). The update is currently available for S20 FE units in Korea as build number ATJ5.

We have added the changelog below (translated from Korean to English):

We also stumbled upon a video on YouTube (via) wherein the uploader of the video says the device is working fine in some cases after the touch fix update.

Here’s what someone on Reddit says about the video:

I used Google translate for the comments. OP says some of the issues are fixed, but not completely.

Edit: Just to add, in one of the korean comments he says “I think the vertical and horizontal are corrected, but the diagonal and swipe will not be corrected. Right now, I have no problem with actual use,”

You can check out the video below (it’s in Korean though).

To check out the comments on this video, head here.

The folks over at Android Police have received an official statement from Samsung regarding the touch-related issues on the Galaxy S20 FE. In it, Samsung has claimed that the issue is affecting a limited number of units and that the company is working to resolve it.

For reference, we’ve added the complete statement below:

“We are aware of the reported issue that appears on a limited number of Galaxy S20 FE devices. We are investigating this issue and working to resolve it. We recommend customers keep their devices up to date with the latest software by accessing Settings > Software update > Download.”

The touchscreen issues on the Samsung Galaxy S20 FE have reportedly not been fixed even after the third consecutive update for the device. An update with the build number ATK1 was rolled out for the Snapdragon variants of the device but did not fix the problem.

However, it does seem that Samsung has managed to at least improve the experience a bit. So the company is heading in the right direction. Although, it’s unclear how long it will take for the problem to be resolved completely.

Next article Xiaomi Android 11 devices get a new camera panel in latest MIUI 12 update; “Beautify for Video Calls” section for others