The first Android 11 Developer Preview went live in February. And last month, Google began rolling out the stable update for its Pixel devices.

Of course, there were many updates and beta releases in between the first Developer Preview builds and the stable rollout.

This is done to help iron out any bugs and issues before an update goes live for the public.

But it seems that the beta testing didn’t pay off all that well for Google. This is because soon after users installed the stable Android 11 update, a bunch of issues and bugs came to light.

For starters, many users noticed that the Chat Bubbles feature which was touted by Google as a major new feature in Android 11 was not working in the Messages app.

Then, users also began reporting that their Pixel phones were automatically restarting after installing the stable update to Android 11.

More recently, we also reported that many Pixel owners have started complaining about the excessive battery draining and performance issues with the new update.

That said, it seems Google Pixel device owners are also troubled with all Bluetooth issues while trying to play music in their cars.

Some users claim that the audio automatically cuts out every couple of minutes for several seconds or the audio simply stops playing. Other reports indicate that the audio pauses when the screen is locked automatically. Further, certain individuals also claim they can hear a hissing or crackling sound when connected via Bluetooth. 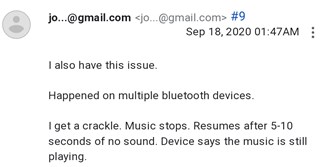 The one thing common with all reports is that these Bluetooth problems only appeared after the users installed the update to Android 11 on their Google Pixel devices.

While there have been reports regarding a buggy experience for Android Auto users after installing the Android 11 update, it does not appear to be the case here.

Furthermore, it seems that Google developers have ruled the problem as a ‘Product feature issue’ and not a ‘Developer issue’ based on the responses to such complaints. However, since the issue only seems to have begun after users installed the Android 11 update, it’s highly likely that a bug may be the reason behind the problem.

We do hope that Google manages to figure out what is causing the problem in the first place and release a patch to fix the update soon.

That said, these aren’t the only problems faced by users who have installed the new update. To know more details regarding the bugs and issues found on Android 11, head here.

Of course, we will continue tracking the situation and will post an update once new details surrounding the Bluetooth issues on Pixel devices with Android 11 installed emerge.

More reports have started flooding in regarding the intermittent Bluetooth issues on Pixel devices. But it seems that Pixel 4a units are the most affected (1, 2, 3, 4, 5). Fortunately, there are a few possible fixes for the issue.

For starters, the problem may be arising because the Music application you are using is being put to sleep by the battery optimization feature. So you will have to the app(s) remove it from the restricted apps list.

Head to Settings > Adaptive battery > Restricted apps, and then remove your Music streaming apps from the list. A user has claimed that this fixed the problem for them.

Another user claimed that the issue was fixed by turning off the ‘Location’ option on the device. Thus, we’d suggest trying out either one or both of these potential workarounds.

Going by the recent developments on the concerned issue tracker thread, while the problem was earlier considered as “a product feature issue; not a developer issue,” after a long wait the matter has finally been assigned to Google team for further investigation.

Next article [Live for Vodafone variant] Xiaomi Mi MIX 3 5G Android 10 update not on cards, but MIUI 12 (Pie-based) could come by September-end

Previous article Xiaomi Mi 8 might get Android 11 update, but don’t get your hopes too high