The Samsung Galaxy Tab S5e released with Android Pie onboard and has recently picked up the update to Android 10. This new software upgrade brought along the company’s One UI 2 skin to the tablet.

As we reported earlier, the update was live in Canada and in the U.S. Although, prior to that, the European and Asian variants of the Galaxy Tab S5e received the Android 10 update.

But like most other system updates, the rollout for Android 10 was in stages. Therefore, the update is yet to be available in certain regions and device models. In the U.S., Verizon was yet to push the new software version to the Galaxy Tab S5e. But Verizon Galaxy Tab S5e owners can finally rejoice since the carrier has announced the release of Android 10 for the Galaxy Tab S5e. The new software is rolling out over the air and should be available on your device shortly.

Apart from the One UI 2 update based on Android 10, the Galaxy Tab S5e gets the August security patch as well with the new software. The build number for this new update is ATG4 and it brings a host of new features.

Some of the new features that you will see with the update are the addition of a Sound Amplifier, Live Transcribe feature, improved Gesture Navigation, and Focus Mode. Of course, there are several other tweaks and improvements that you’ll uncover within the first few days on installing the update. 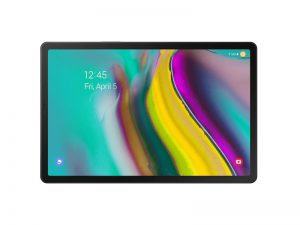 That said, Samsung has rolled out the update to Android 10 for most of its devices. Now, the company is gearing towards the release of Android 11 for eligible devices from its portfolio. From which, the Verizon Galaxy Tab S5e is expected to get it too.

So keep an eye out on our dedicated tracker to know more about the rollout. Also, stay tuned to PiunikaWeb for coverage on similar topics.