Samsung unveiled the One UI 2.5 skin alongside the Galaxy Note 20 series at its UNPACKED event a few weeks ago. At the event, Samsung caught us all off guard by announcing it will provide up to 3 OS updates for certain devices.

Therefore, it is now joining the likes of Google and OnePlus who are the only two major OEMs that have been rolling out 3 system updates for their devices. Nevertheless, coming back to Samsung’s latest iteration of One UI, it brings a bunch of new features.

And without waiting much, the South Korean giant began rolling out the One UI 2.5 skin for the Samsung Galaxy S20 series in Europe first. Following that, Verizon and T-Mobile released the update in the U.S.

And since then, Samsung has already pushed the update in India, Korea, Canada, and in the UK on the EE, Three, and Vodafone networks. However, One UI 2.5 is yet to arrive in a few other regions as well as on other carrier-branded units.

Luckily, Sprint Galaxy S20 Ultra users don’t have to wait for the One UI 2.5 update to be released. This is because it seems the American carrier has begun rolling out an update that brings Samsung’s latest skin to the device.

Further, a Galaxy S20 Ultra user on Reddit has confirmed the arrival of the One UI 2.5 update by sharing a screenshot on the platform:

While we haven’t managed to confirm if the update is rolling out to other models from the S20 series, it’s highly likely that the S20 and S20+ on Sprint will bag the update shortly.

As usual, we will continue tracking the One UI 2.5 rollout so make sure to keep an eye out on our dedicated tracker for the update. 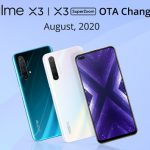