New versions of Android are often exciting because they bring a truckload of new features and abilities to devices. These changes are made even more pronounced once specific device makers include their own skins and changes.

Already, we have seen a few Realme devices bag initial Beta updates to Realme UI 2.0 and we also know a few features that this new custom skin from Realme is set to bring to eligible devices courtesy of a Q&A session with Realme CEO, Madhav.

A few things have changed since then, Realme UI 2.0 is presumably at a much more advanced stage of development than it was back then and therefore, it makes sense to take another look at the upcoming skin for Realme devices.

In the 34th episode of Realme’s Weekly solution, the company through its moderators have taken up a Q&A session in which they have addressed a few issues that users had been wondering about and here is a snippet of the queries raised.

Q. Newer realme devices are receiving a Super nighttime standby feature. Will this come to older models too?

A. Yes, this feature significantly decreases battery drain overnight and will be made available to all realme devices running realme UI 1.0.

Q. Will realme provide the SoLoop video editor app officially with an OTA?

A. Yes. The SoLoop app comes preinstalled on the most recent realme devices, and will be provided to older devices starting Q3 via an OTA – and you will be able to uninstall it if you think you do not need it.

Q. Is realme going to provide some more customization for the notification panel?

Q. Will Google Phone and Messages apps replace the stock ones in older realme devices too?

A. Sorry, the stock apps will be replaced in new models only.

Most notably from the excerpt above is that many of the features that are set to debut in Realme UI 2.0 will be back-ported to devices running Realme UI and as such, they might not be missing out on too much. Also, Google’s stock apps will only come to newer Realme devices, older ones are a little out of luck.

That said, Realme 2.0 is still going to be a huge update with drastic changes that should hopefully differentiate it from ColorOS 8 because many people felt that Realme UI was merely a rebranded build of ColorOS 7. Hopefully, these two skins will start taking their own shape.

Earlier, we had seen reports that Realme was planning to bring the Smooth Scrolling feature to all Realme devices through an OTA slated for later this year.

As mentioned earlier, Realme UI 2.0 is already in the works. To check whether your device is eligible for an update to this skin, check out our compiled list of eligible devices.

We shall continue to keep an eye on this build and update our dedicated tracker as more and more eligible devices bag the Beta and stable builds of the same. You can also check out Realme UI’s dedicated tracker. 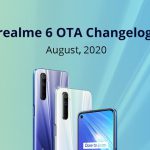 August update for Realme 6, 6i & Realme X50 adds smooth scrolling, charging decimal point, & more; Realme 3i gets it too