The Realme 6 Pro is arguably one of the best smartphones in its price range. The device offers decent specifications that include the Snapdragon 720G coupled with either 6GB or 8GB RAM. Further, one of the main selling points of the phone is its 90Hz refresh rate IPS LCD panel.

Given that the device has a 90Hz refresh rate panel, users would expect to be able to take advantage of the high-refresh-rate display at all times. At present, there are several apps and games that do support high frame rates. However, one of the most popular games — PUBG Mobile was limited to 60fps only.

But that’s now going to change since PUBG Mobile has officially brought 90fps support to the game, albeit only for certain OnePlus phones for the time being. Other eligible phones will get 90fps support in September. Naturally, some Realme 6 Pro users have been wondering whether or not their device will also pick up 90fps support in PUBG Mobile when it becomes available on devices from OEMs other than OnePlus. For some, it might be a no-brainer that the Realme 6 Pro will also get 90fps support because of its 90Hz refresh rate display.

But things aren’t all that simple. While the Realme 6 Pro has a 90Hz refresh rate display, it, unfortunately, lacks the hardware to push 90fps in PUBG Mobile. The game, as it is, is relatively resources intensive. Therefore, running the game at 90fps requires a powerful chipset.

Further, a Device Team member on the Realme Community also stated that the Realme 6 Pro will not get 90fps support in PUBG Mobile. This comment was made in response to a user’s query regarding 90fps support for the game on the device. 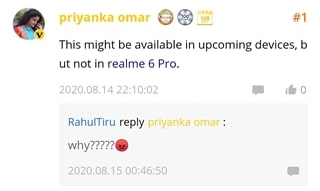 So it seems Realme 6 Pro users will not be able to take advantage of the 90Hz refresh rate display while playing PUBG Mobile. Although, as the Device Team member mentioned, upcoming phones from the company may be able to run PUBG Mobile at 90fps.

FYI, the Realme 6 Pro comes with Android 10 pre-installed and is expected to pick up the Android 11 update once it’s released. Here’s an entire list of Android 11 eligible phones from Realme.