While Huawei might not be thriving in western markets at the moment, it continues to hold a good share of the smartphone market in China. Previously, we reported that the company is prepping the release of HarmonyOS 2.0.

This is the company’s in-house platform which will soon be available on a slew of smart devices. But Huawei seems to be sticking with Android for its smartphones for now. Speaking of which, the rollout of EMUI 10.1 based on Android 10 is underway.

Earlier, we reported about the release of the new software version for 13 new devices. Furthremore, two new smartphones from the company are now receiving the update. 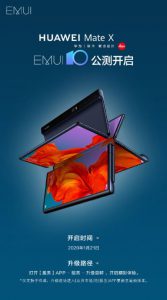 The devices in the spotlight are the Huawei Mate Xs 5G and the Mate X. Both foldable smartphones are now receiving the stable EMUI 10.1 update in China. Huawei’s first folding phone, that is the Mate X released with Android 9 Pie on board along with EMUI 9.1. On the other hand, the newer Mate Xs 5G released with EMUI 10 on top of Android 10.

This new update comes in with a download size of over 4GB. And it bumps the EMUI version from 10 to 10.1. Users on Weibo confirmed the arrival of the new software version for the Mate X and the Mate Xs 5G in China.

EMUI 10.1 does not bring any major changes to the OS. However, it does offer a few improvements and features that help improve the user experience. This includes the set of new themes and Huawei Share which is similar to AirDrop.

Now that most of the eligible devices are receiving or have received the Android 10 update, the company can now shift its focus on Android 11. A few days ago, we reported that the company might be planning to release Android 11 this quarter (Q3).

You can also check out our Huawei Android 10 update tracker to know when your Huawei phone will be receiving the update.

Huawei has now released the EMUI 10.1 update for the Huawei Mate Xs in Europe. This new update comes as version 10.1.0.151 and is rolling out via an OTA package of around 4GB. As expected, the update brings some new changes and improvements.

[Answer Call]
Allows you to answer voice and video calls to the phone using your Huawei laptop.

[File Editing]
Allows you to read and edit files on the phone directly from your Huawei laptop, as well as share the phone’s network connection.

[AI Voice]
Adds AI Voice. Say “Hello Celia” or press and hold the Power button for a second to activate the voice assistant and give a voice command or ask a question.

Huawei Mate Xs users in New Zealand are now beginning to receive the EMUI 10.1 update on their devices. The software version for the update is 10.1.0.151 and the OTA download size is 4.21GB. Here’s a screenshot of the update shared by a user on Reddit: