Google Chrome is easily one of the most popular web browsers that are currently available. For years, competitors such as Microsoft’s Edge, Firefox, and Safari have tried to get users to switch over from Chrome but Google’s offering still dominates.

Of course, this isn’t to say that Google Chrome is flawless. In fact, users often come across unexpected errors such as the STATUS_INVALID_IMAGE_HASH crash and more. Back in May, we also reported that some Google Chrome users were not able to use Facebook Live.

So it’s clear that the Chrome browser has its fair share of ups and downs. Adding to the list of bugs, it seems that many Google Chrome users are unable to see the minimize, maximize, and exit buttons.

Apparently, the problem is affecting users on Mac and Windows machines, and some reports of the problem date back to April, and the most recent reports are from just a few days ago. As a result of the bug, users are not able to close or minimize their Google Chrome window.

One user running Windows 7 with Google Chrome version 84.0.4147.89 installed, claimed that the three buttons disappeared after accidentally hitting a combination of keys on the keyboard. Similarly, another user on a computer running macOS also claimed that the buttons were visible as usual, however, they disappeared after the user might have accidentally clicked on something. Here’s a screenshot of the full complaint from the user that is posted on Google’s support page: 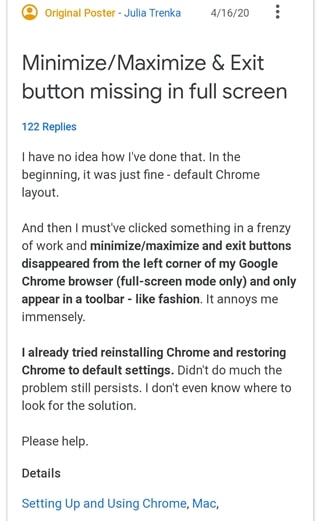 At the moment, it’s still not fully clear what might be causing the three buttons to disappear on Google Chrome. But most reports suggest that the problem might be occurring due to a bug in the ‘Themes’ option for Google Chrome.

Luckily, a user might have found a fix for the issue and has shared it on Google’s support page. Moreover, several users have reported that the fix worked for them and the minimize, maximize, and exit buttons are now visible once again.

In case you’re facing the same issue on Google Chrome, you may want to try this fix suggested by an individual with the username Qasim Ali 5011:

Hey guys, I’ve had the same issue and couldn’t find any solution. I had “Into the Mist” as my Google Chrome Theme. I went to Settings > Appearance > Reset to Default and the problem got solved. Hope it works for you guys as well. Another user also pointed out a temporary workaround which is to right-click on the Chrome shortcut and then select ‘New Window’. This should bring up a new Chrome window with the three buttons.

Keep in mind that these solutions/workarounds are based on user suggestions. Google has not yet acknowledged the problem officially. As usual, we will track the situation and will post an update if there are new developments.