Xiaomi will unveil its next-gen MIUI 12 Android skin early next week. Even before this day is here, we’ve already bumped into several leaks of features to expect in the upcoming software update.

We have also set our eyes on the design changes that Xiaomi is working to include in the MIUI 12 update. Today, the company has in an official capacity shared details of the new MIUI 12 camera UI to add on what we already know about Dark Mode 2.0 and dynamic AOD.

In a couple of Weibo posts, the product manager of Xiaomi’s camera team, Queena, has shed some light on what the camera UI will look like after the update to MIUI 12 arrives.

Apparently, the new MIUI 12 camera app will include a layout customization function where users will be able to pick the camera options they want and place them at the forefront. A minimum of 2 functions and a maximum of 10 functions will be supported.

In addition, Queena also points out that the updated camera UI will allow users to switch the color of the layout between five colors of yellow, pink, purple, blue, and green.

Sure, having an option where the color changes according to the weather would also be a welcome idea, but for a start, these five are all you get. Below is how the blue layout looks like.

We only have a few days between now and the launch date – April 27. If Xiaomi continues this way, there won’t be much left to talk about at the launch event, especially now that we also know about the company’s other plans for this day. 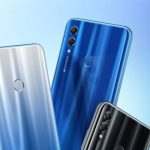