[Now in Pakistan too] Samsung Galaxy A30 One UI 2.0 (Android 10) update finally arrives

It seems like, Samsung has ticked off another Galaxy A-series device off the list of the device receiving the Android 10 (One UI 2.0) update which is the Galaxy A30.

This morning, we have reported that Galaxy A50s was served with the One UI 2.0 update. The update was live for the users in Vietnam and other regions are expected to join soon. 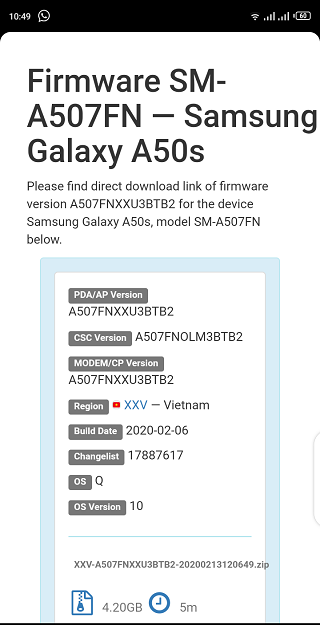 But now, according to a user’s tweet, the update is going live for the users of the Galaxy A30 in India. The airborne update is arriving with the build number BTB3 and it weighs around 1.4 GB in size.

Note that along with all the One UI 2.0 and Android 10 goodies, this update also bumps the security patch level to February 2020. You can check out the screenshot below:

However, according to a user on Twitter, this new One UI 2.0 (Android 10) update for Galaxy A30, misses out on the built-in screen recording feature.

# Samsung launches update # Android 10 with One UI 2.0 interface for # Galaxy A30 and the beginning in India with build number: A305FDDU4BTB3
📍Size of the update: 1.4 GB with the February safety update 🔥
The update adds all the basic features of the Android 10 system, but the video screen recording feature is not present.

It will be interesting to see why Samsung has made that exception and not added the screen recording feature for the device. Note that the update is arriving via OTA in batches and soon will make its way to other regions as well.

The Android 10 update for the Galaxy A30 is finally live in Europe too. It is currently live for the users in Serbia and is arriving with the version number BTB3 and weighs in around 1.5 GB in size. The update packs in the February 2020 security patch as well.

According to a recent user report, the Android 10 update is now live for the users in Indonesia as well. It arrives via OTA with version number BTB3 and weighs in at 1.52 GB in size.

The One UI 2.0 (Android 10) update is now available for the units in Pakistan as well. It arrives with version number BTB3 and weighs in around 1.47 GB in size. It bumps the security patch level to February 2020.