LG is trying its best to update its devices to the latest Android 10 update but has been quite slow when comparing to other OEMs. Luckily for the users of LG V50 ThinQ in Europe, Android 10 update is now available.

In the camera department, it has a triple camera setup with 12 MP primary sensor at the rear and a dual-camera setup at the front. The LG V50 ThinQ also comes with a rear-mounted fingerprint scanner.

Cut to now, according to a user on Reddit, the update has reached Europe and is currently live for the users in Spain. It arrives with the version number V20e and weighs in around 1.75 GB in size.

The changelog does not mention anything except the Android 10 update. You can check out the screenshot along with the official changelog below:

Notably, we have reported earlier that the Android 10 update for the LG V50 Thinq went live for the Sprint carrier network users in the US that bundled January 2020 security patchset.

In the meantime, you can check out our dedicated LG section to read more similar stories surrounding LG smartphones.

According to a recent user report, the LG V50 is getting the Android 10 update on the EE UK network carrier as well.

The update to Android 10 for the LGV50 ThinQ is now rolling out for devices in Australia. Head here for more details. 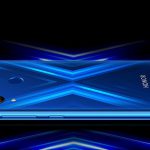