The last time we reported about a T-Mobile OnePlus 7 Pro software update was in late 2019 – the update that brought the stable OxygenOS 10 based on Android 10 to the handset.

Despite arriving towards the end of December, T-Mobile couldn’t manage to bundle the then-latest December security patch, instead going with the November patch. Quite disappointing, but no one probably noticed as they were getting busy to get acquainted with Android 10.

As of this writing, the Magenta carrier is now rolling out a new OnePlus 7 Pro software update that installs January 2020 security patches. Once again, the company is late into the party, with several vendors having already pushed the latest February patches to their devices.

The update is rolling out as software version OxygenOS 10.0.2.GM31CB and weighs in ay 191MB. For some reason, the newer OnePlus 7T is receiving an older December 2019 security patch on the same carrier.

Arriving as version OxygenOS 10.0.6.HD63CB and weighs in at 286MB, suggesting that it has more than the typical security patches. Indeed, in the changelog, OnePlus also mentions some improvements to the system stability and bug fixes.

While this is happening, users of the global OnePlus 7 and 7 Pro are growing frustrated by the lack of software updates, be it those in the Open Beta channel or even the stable version.

The last time the stable channel picked up a software update was back in mid-December with the November security patch. As for the Open Beta channel, the latest Open Beta 8 was released in early January, which makes it nearly a month and a half since the devices got updated. 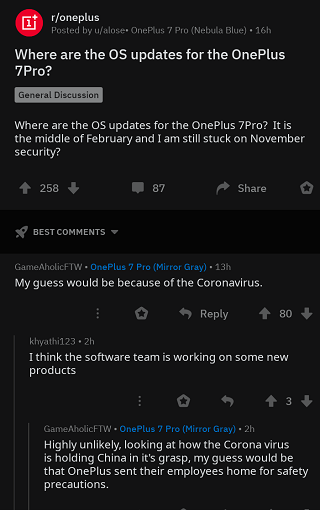 when is beta 9 coming
Source

Thanks to a response from a OnePlus staff member via the official forums, we now have an idea of what could be causing the software update delays. Apparently, the extended Chinese New Year holidays could be one reason alongside the other much so obvious one – the coronavirus attack. On January 28, Guangdong Province where OnePlus is headquartered announced that working activities would be delayed until after February 9. So yeah, it makes sense that there are no software updates coming in lately.

Since the extended Chinese holidays came to an end, it seems the state of OnePlus software updates is now dependent on the coronavirus situation. We hope things get better sooner than later.