OPPO unveiled ColorOS 7 in November 2019, and according to the ColorOS 7 timeline, which depicts that the stable update should arrive on China’s Realme X2 in April 2020.

Users were waiting for the second batch so that they could also experience the Realme UI on their Realme X2 but that was not the case. Because according to our previous report, the second batch was expected to get delayed due to a coronavirus attack.

But, in a surprising turn of events, the Realme UI 1.0 (Android 10) second batch update for the Realme X2 has now started rolling out for the users in China.

Matter of fact, the update comes with the same build i.e. C.02 before (first batch) and it being pushed in batches via OTA. You can check out the screenshot of the update prompt below:

However, going by the user comments who have received and installed the new update for the Realme X2, this Realme UI (Android 10) update brings some issues:

Here are some suggestions:
1 The flashlight is not bright enough (it should not be as bright as a candle), and the screen cannot be turned off by the power button after the light is turned on. Originally, one action can be completed, and 4 actions (light screen, unlock, Pull down, close)
2 The traffic statistics have no meaning, because the used traffic is basically inaccurate, unless it can be corrected (but not).
3Since it is a sunlight screen, I personally feel
it is hard to see clearly in the sunlight (except the sunlight in the morning or dusk) 4Automatically adjust the brightness, I always feel that the brightness is low, which is very laborious.

Moreover, there are slight changes to the Camera UI for the device with this second batch update of Realme UI.

The update is available for users in China. You can check for the update by heading to Settings>>Software Updates>>Check for new updates. 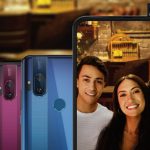