[Some regions to get update in May] Huawei P20/P20 Pro EMUI 10 (Android 10) update rolling out, says support

Huawei has been hard at work to deliver stable builds of EMUI 10 (Android 10) to its eligible devices. Most of its flagships now run on the latest firmware in many regions and it appears that the Huawei P20/P20 Pro might be joining this club.

Android 10 has been out for several months now, having been officially unveiled back in September 2019. Huawei then released several roadmaps to elaborate when the devices would get updated to the EMUI 10 skin. 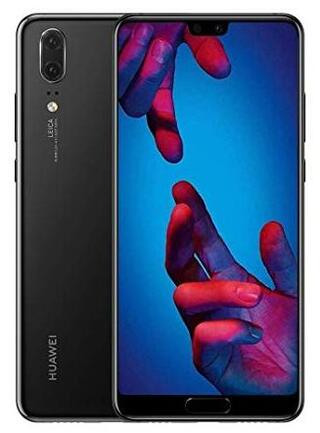 In a tweet to a Huawei P20 user, Huawei India’s official Twitter handle goes to confirm that indeed, Android 10 has been rolled out to the P20 and the P20 Pro.

Thank you for showing your interest for Android EMUI 10. We would like to inform you that Stable version of Android 10 / EMUI 10 for Huawei P20 Pro device has been recently released.

Previously, we heard reports that the beta testing for these devices, which started in November, had been closed. A stable build of EMUI 10 was expected somewhere in mid-January. We don’t know the exact timing, but looks like it’s now airborne.

It is worth noting that while this update is just now rolling out to devices in India and other regions, Huawei pushed out the stable build of EMUI 10 to this and other devices in China back in mid-December. 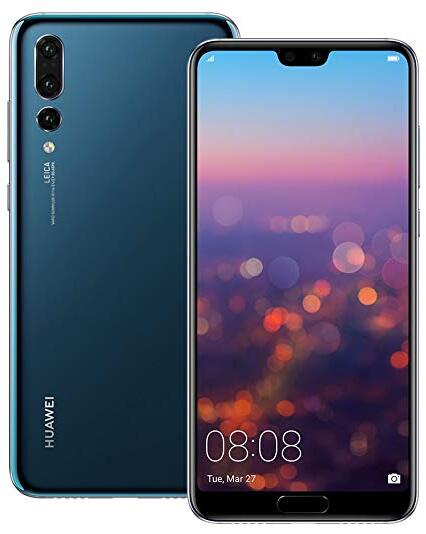 On the other hand, Honor 10 and Honor View 10 have also been updated to the Android 10-based EMUI 10. According to the company’s timeline, most eligible Honor and Huawei devices have already received the update with only a handful left.

In two separate responses to its users, Huawei’s official German and South African Twitter handles have indicated that the update will be rolled out in stages to Huawei P20 users in their respective regions in May this year and later this month. 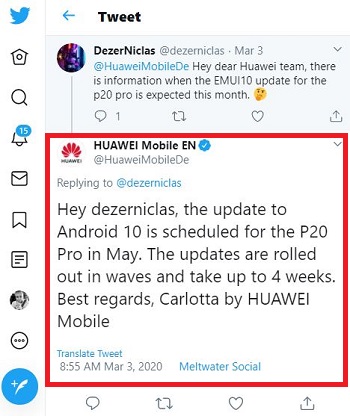 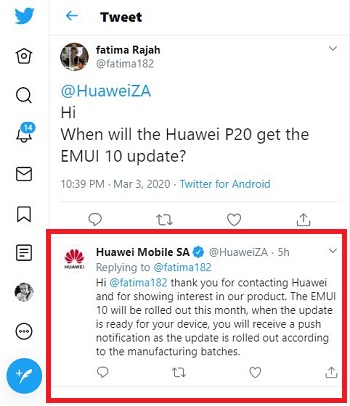 NOTE: We have these and many more Huawei-related stories in our dedicated Huawei section.

Previous article [Note 9 gets it on Verizon] Android 10 update for Snapdragon Galaxy S10 arrives next week, March 2020 for Note 9/S9