Xiaomi has updated quite a few smartphones to MIUI 11 in the recent past. However, there are not many devices that have received the Android 10 update.

In fact, it is expected that since 2020 has started, the Android 10 updates will be pushed speedily for devices that are still waiting in line. And one of the Xiaomi devices has been ticked off from this list.

In a recent development, the Mi 8 SE Android 10 update is now available for download. Notably, the update is currently live for users in China.

PiunikWeb readers should know that we have reported that Mi 8 SE got the stable MIUI 11 based on Android 9 Pie back in October. Besides, some days later in the same month, Android 10 beta update went live for Mi 8 SE Chinese users.

Cut to now, the stable Android 10 update carries version number V11.0.1.0.QEBCNXM and weighs in around 2 GB for the complete update package for the Xiaomi Mi 8 SE.

It offers up to 128GB of onboard storage, houses a dual 12MP + 5MP camera setup at the rear with 20MP front shooter and a rear-mounted fingerprint reader as well.

Like always, the update is pushed via OTA in batches but it might take some time in hitting all the units. You can check for the update notification by heading to Settings>>About Phone>>System update>>Check for update.

However, you can avoid the wait and grab the update for the Mi 8 SE from any of the below-mentioned links. Keep in mind that the update is available via xiaomi.eu as well:

Xiaomi has re-released the Android 10 updates for the Mi 8 SE with February 2020 security patch. Read the whole story here. 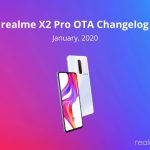