Asus ROG Phone II is one of the most powerful handsets on the planet right now, if not the most. The device topped AnTuTu’s recent benchmarking rankings thanks to the impressive 12GB RAM and 512GB of UFS 3.0 storage allied to an even more superior Qualcomm Snapdragon 855+ SoC.

But as usual, software remains to be king when it comes to performance and to ensure the ROG Phone II doesn’t lose it, Asus has been rolling out regular updates to the device with new features and sometimes plenty of bug fixes and optimizations.

Not long ago, we reported about an issue with touch responsiveness on the ROG Phone 2. As part of the latest update arriving as version 16.0631.1910.64, Asus has addressed the touch failure issue, but that’s not all.

The update was published yesterday, so there should only be a handful of units with the update right now. More ROG Phone 2 models should begin seeing the OTA download notification during the weekend. Unfortunately, though, the same October patch prevails.

When it arrives, the update will carry the changes below:

As noted, it may take time before all ROG Phone II users across the globe receive the latest update. Rather than wait, you can pick up the updated firmware from the link below and install it manually on your phone.

Asus rolled out the stable Android 10 update to the ZenFone 5Z late last month, but it’s only now that the same update is arriving in Japan. Rolling out as version 100.04.44.108, the update also tags along a newer Android security patch for the month of November 2019.

Like the ROG Phone II, we also have the download link for the latest ZenFone 5Z firmware for the global model so that you don’t have to wait days for the OTA to arrive. 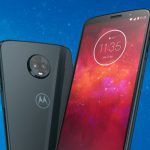