Boruto: Naruto Next Generation Time Slip arc may be ending soon as Urashiki is finally defeated in Boruto Episode 135. After several episodes of combat with Urashiki, Boruto and Naruto were finally able to land a finishing blow to their foe.

It was not an easy win, however, as the tides seem to turn against their favor at first. In the previous episode, Boruto and Naruto managed to take down Urashiki. But it was only temporary as the enemy had a power reserved for such a situation. 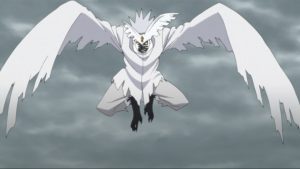 Boruto and Naruto thought that their last attack did enough damage to eliminate Urashiki. But in their premature celebration, Urashiki rose up floating in the air. He took his chakra gourd where he keeps the chakra he has stolen.

He also consumed his own Rinnegan and transformed into a more powerful being. A golden Rinnegan appeared in his forehead and his eyes were restored but became golden Byakugan.

His form resembles that of a harpie. He can now use his arms and sleeves of his clothing as wings to fly and shoot wind attacks. He also can consume jutso fired at him. 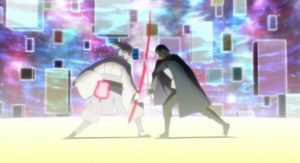 Sasuke has been unconscious for a while after fighting with Urashiki. He has been wounded and fell into a river. Sakura found him on a riverbank unconscious. She took him to a safe place and started healing him.

After some time, Sasuke has awoken and casually called Sakura’s name. This surprised Sakura and wanted to ask something perhaps related to Sasuke. Before she was able to do so, she passed out because of fatigue.

As soon as Sasuke regained some strength, he returned to the battlefield to assist Boruto, Naruto and Jiraya. He came just in time to save Boruto from a fatal blow from Urashiki. 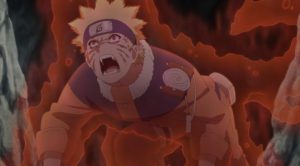 Urashiki received a combination of attacks from Boruto, Jiraya, and Sasuke. He then unleashed his new technique, Gyokkou, which temporarily paralyzes Naruto. Sasuke then attacks Urashiki with his Amaterasu-powered sword.

Urashiki skillfully dodged Sasuke and beat him to the ground. By this time, Naruto is furious and is trying to contain the Kyubi’s chakra. Urashiki then found an opportunity to attack Naruto.

Unable to move, Naruto sat helplessly still trying to control the Kyubi’s chakra. Jiraya then throws himself at Naruto, receiving Urashiki’s attack for Naruto. This was the last string holding Naruto back. He went berserk causing the Kyubi’s chakra to overcome him. Having the Kyubi’s chakra uncontrollably leak from Naruto could kill him. He is basically controlled by his rage and does not recognize his surroundings. Naruto creates a giant Rasengan with the Kyubi’s chakra to fire to Urashiki.

Unwilling to give up, Boruto ran to Naruto with an attempt to stop him. He willingly received Naruto’s attacks and was even willing to take on his Rasengan. In the process, Boruto tapped into Naruto’s consciousness waking him up from a dark slumber. Naruto regained consciousness and managed to combine his jutso with Boruto. Their training with Jiraya has helped them both accomplish this. Together they fired their jutso towards Urashiki.

Urashiki counters them with his own jutso that resembles a Rasengan to match Boruto and Naruto’s giant Rasengan. While the two Rasengan’s clash, Jiraya sneaks in a Rasengan of his own to distract Urashiki. Sasuke then used Kirin to attack Urashiki with a lightning bolt. This combination of attacks weakened Urashiki. Naruto and Boruto were then able to break Urashiki’s jutso and hit Urashiki causing his defeat.