The Time Slip Arc of Boruto: Naruto next Generation is at its climax. Boruto episode 134 was released on December 01, 2019. Naruto was again attacked by Urashiki Otsutsuki, and Boruto, Jiraya and Sasuke were present to protect him.

In the middle of the battle, however, Sasuke reached his limit. He depleted his chakra and was left with nothing but physical attacks. The battle against Urashiki was a total mismatch. They were having a hard time even with the presence of Jiraya, a legendary Sanin. One of the reasons for this is they did not know the full extent of Urashiki’s powers.

The last time they fought against an Otsutsuki, it took the five Kages plus Sasuke and Boruto to win. It was a fight against Momoshiki, and Naruto and Sasuke were at full power then.

In the latest episode, Sasuke exhausted his chakra. And Jiraya, Boruto and Naruto did not know how to best fight Urashiki. In order to save Naruto, which was Sasuke’s mission, he charged Boruto to take Naruto and escape. 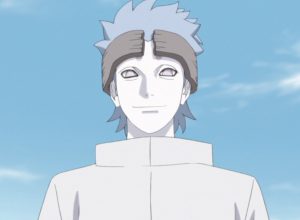 To buy time for them to escape, Sasuke took Urashiki with him to a cliff and they fell on a river. Sasuke washed ashore where Sakura found him and took him someplace else to heal. Urashiki on the other hand, searched for Sasuke, Naruto and the rest.

Naturally Boruto wanted to come back for Sasuke to save him. But Jiraya talked him out of it saying they can’t beat Urashiki without knowing his abilities. Then Boruto noticed something unusual.

The blood on Jirayas clothing was still fresh, while the blood in Urashiki’s dried faster. Boruto thought this might have connection to Urashiki’s ability. To confirm, they deliberately attacked Urashiki. 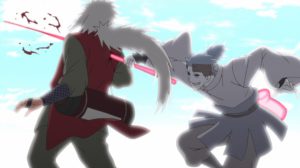 During their attack, their theory was confirmed and they discovered Urashiki’s visual prowess. He had the ability to warp into the past by several seconds. He uses this ability to formulate the best counter attack.

Urashiki has several abilities. He is perhaps one of the most unique among the Otsutsuki clan. Normally, he possesses the Byakugan. But at will, he can activate his Rinnegan. 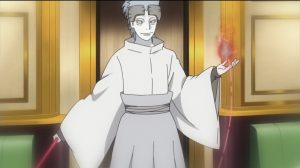 His Rinnegan changes color in order to perform different techniques. When red, he can hide in a pocket dimension. When purple, he can escape direct attacks by dispersing. And when blue, he can warp into the past by several seconds. Jiraya performed his Summoning: Toad Mouth Bind, containing everyone in a giant toad’s stomach. Naruto attacked with a barrage of clones forcing Urashiki to perform his jutso.

To counter, Urashiki released his jutso several times. The toad’s belly had poisonous gases which then took effect on Urashiki much faster than normal because of his ability. This incapacitated him for a while, giving time to Boruto and Naruto’ counter attack.

Boruto and Naruto performed a combo attack to take down Urashiki. Naruto used his Rasengan, while Boruto used his Gale Palm to boost Naruto’s attack. Boruto called it Naruto Stream, a spin-off his own technique. 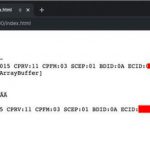 Wish you could jailbreak using only the browser? Google Chrome based checkm8 wrapper is in work 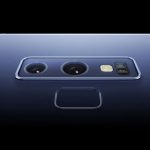