Motorola is showing some improvements in terms of pushing security updates. Recently, quite a few Moto devices have been served with October security patches.

Not only this, the company seems a bit occupied with the launch of its iconic Moto Razr phone that we will get to see in a new avatar pretty soon.

With some positivity going around the Motorola brand, US carrier Sprint and Verizon have pushed in the October security updates for multiple Moto phones.

The Motorola Moto G6 Play and G7 Play models get the update on Sprint while the Moto G7 Power is getting the October patch on the Verizon network. Let us take a look at the update for each of the devices one by one.

The phone got Pie update a long time ago. However, AT&T brought in the Android 9 Pie pretty late for the Moto G6 Play – basically in September.

Talking about the update, it carries version number PCPS29.118-41-2 and brings in the security patch level of October 2019. Below is the screenshot and the changelog of the same:

The 2019 launched, Moto G7 Play is also getting the new October security update on the same carrier network. To recall the device packs in Snapdragon 632, 2 GB of RAM, a 3,000 mAh battery along with a 13 MP camera at the back.

Coming to the new update, it carries version number PCYS29.105-134-3. Below is the official changelog and the screenshot of the official Sprint update: 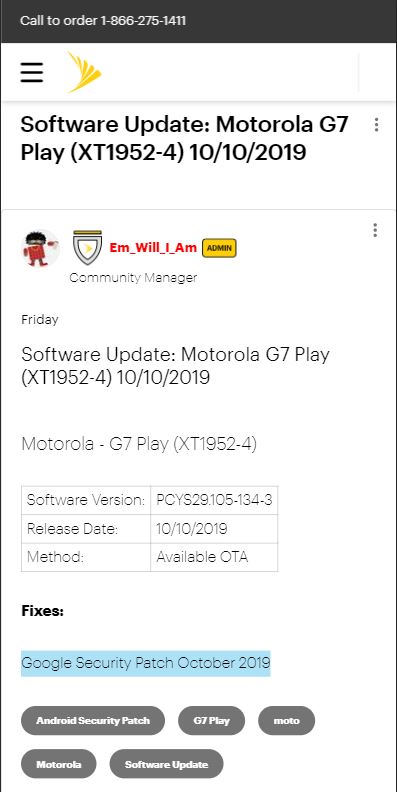 Another mid-ranger from Motorola is getting the October patch but, on the big red network. The Moto G7 Power OTA brings in some improvements in battery temperature sensor accuracy along with the security update.

It carries the version number PDOS29.114-134-4. You can check out the screenshot and the changelog of the update below:

Matter of fact, unlocked Moto G7 Power got the same update a few days ago. Motorola declared about the security patch at the beginning of October.

Note that all the updates either on Sprint or Verizon is being pushed via OTA in batches and will take some time in hitting all the devices. However, you can check for it manually by heading to Settings>>About Phone>>System Updates.

Note: You can check out our dedicated section for Motorola smartphones on our website for more similar stories.