Valve earlier teased the classic Counter-Strike 1.6 knife on twitter and didn’t waste time in officially bringing it back in the update. The update released on October 18 was titled Cache and release. The update included the new remake of Cache map remade by its creators FMPONE and Volcano. The remade Cache is available to play in official Casual, Deathmatch and Scrimmage servers. However, Cache isn’t added to the active duty competitive pool. Cache was removed earlier from the game to begin its remaking process and Vertigo was placed in the competitive pool instead of it.

In March, 2019 Cache was replaced by Vertigo in the CS: GO competitive map pool. Even with the lot of controversies around the decision, Vertigo was never replaced back with Cache. Players have been waiting for the re-release of the map to see the new design one of the most loved maps of Counter Strike.

The Cache map was announced and shown at the ESL One New York 2019 event, where the new map was made public and the re-works were shown to the players. After the grand-final at the event, it was confirmed that the new Cache map will be released on October 10.

For the update, Valve also revealed a variety of new weapons case and sticker capsule, each with new skins and stickers to celebrate 20th Anniversary of Counter-Strike. The stickers range from Remarkable to Exotic. The new 20th Anniversary Case includes 30 different new weapon skins, including 17 different gun skins, and 13 skins of the 1.6 knife, now known simply as Classic Knife.

The rarest of the skins in the 20th Anniversary Cases include golden Commemoration skin for FAMAS and fiery Wildfire skin for AWP. This is second weapon case for the year with one coming in May 13 update. What do you think about the new update? Let us know in the comment section below! 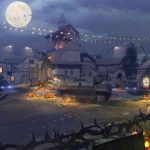