The tablet market is not able to generate the excitement that it used to, previously. Clearly, Apple holds the top position as well as a firm grip on this segment.

However, there are various Android tablet manufacturers that are continuously bringing in more tablets to keep this segment alive. And the one name that pops up in our minds is Samsung, which is a very often evolving its Galaxy Tab series.

This is the only reason why the Galaxy Tabs have been around for so long. Moreover, according to a report by IDC Worldwide Quarterly Tablet Tracker, tablet shipments have seen a decline of 5% but Samsung was able to grow its market share owning to good performance of E and A series. Adding another tablet in its portfolio, Samsung recently launched the Galaxy Tab S6 which also features a handy stylus. Cut to now. A new update has been rolled out for the tablet.

For a quick refresher, the Galaxy Tab S6 is powered by the Snapdragon 855 paired with 6/8GB of RAM with 128/256GB internal storage. It has a 10.6-inch Super AMOLED display and runs on Android 9 Pie with One UI on top. The device is a flagship tablet that sports a dual camera 13MP+5MP setup at the back and an 8MP selfie camera at the front. Moreover, the Tab S6 houses a 7040 mAh battery with fast charging 15W support.

Talking about the update, it carries the version number T860XXU1ASJ1 / T8600XM1ASJ1 and weighs in around 409.5MB in size. With this new update, the security patch level on the tablet bumps up to September 2019. Not only this, the new update brings in landscape support for apps as well.

Below is the official screenshot and the changelog for the update on the Galaxy Tab S6: 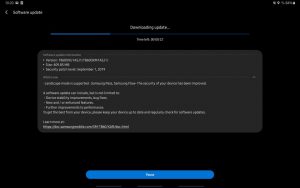 The previous update received on the Tab S6 brought in the August update along with some camera enhancements. Also, the Verizon variant got a day-one update that brought improvements for Verizon messages+ application.

The tablet is now widely available for purchase and looking at the pace of the delivery of updates on the device, the October security patch might take up some time before it arrives on the Galaxy Tab S6.

Let us know in the comments below whether you received the latest update on your Galaxy Tab S6 or not and whether it brings any further improvements for the device.

Note – You can check out our Samsung Section to keep yourself updated regarding all the latest happenings around Samsung devices.