The first-ever Pokemon go World Tourism day event has gone live in the game. This event has been organized under the collaboration of the United Nations World Tourism Organization and Niantic. Pokemon Go World Tourism Day event is also bringing in a range of bonuses for players.

The event has already started and will stay live until October 1, 2019, at 1 pm PDT. Pokemon Go World Tourism Day also features research tasks. The completion of these tasks will give rewards to players. The list of tasks has been detailed below, along with their corresponding rewards.

Zangoose or Seviper. Players will encounter Pokemon which is not native to their region. (Zangoose USA, Seviper in EU) Pokemon Go: How to do a trade of over 10,000 km for the World Tourism Day Event?

The biggest challenge in completing this task is that trade needs to happen in one trade. It cannot be done in combinations. The best way to do this trade is by visiting /r/pokemongotrades/ and adding friends from far away regions.

Players can open gifts & hatch 7km Eggs from that far away region or location. Then trade those Pokemon with distance over 10,000 km. Speaking of the event bonuses, players will get 2 x XP from Pokestops. Also, during this event, only 1/4 Stardust will be required for Trading. Under the event, Mime Jr. has also made its debut in the game. Mime Jr. will hatch from 5 km eggs in Europe.

A new United Nations World Tourism Organization T-shirt has also been added to the style shop under the event. Many regional Pokemon will hatch from 5 km eggs under this world Tourism Day event. Shiny Zangoose and Seviper are now also available for the game.

A list of regional Pokemon that will hatch from 5-kilometer eggs has been listed below. 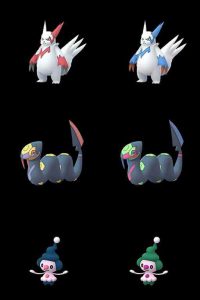 For a quick refresher, Niantic added the Unova Pokemon on September 16. Generation 5 Pokemon added to the game under week three of the Ultra bonus event. The addition of generation 5 Pokemon has shaken up the egg hatch pool of Pokemon Go.

Niantic has also announced that Mewtwo will feature in raids on October 8, 2019, as Tier 5 Raid Boss. Mewtwo is a psychic type Pokemon and is weak against strong Dark-type, Bug-Type, and Ghost-type Pokemon. Best counters for Mewtwo are the following : Houndoom, Gengar, Mewtwo, Tyranitar, Origin Giratina, Absol, and Weavile.