Official release date of One Piece chapter 956 will be tomorrow. And more spoilers keep leaking. The most intriguing spoiler was related to Sabo’s destiny. The news about Sabo’s fate brought many fans to tears and some are in the state of denial.

There is another spoiler that is noteworthy.

It is the abolition of the Warlords (Shichibukai) system during the Reverie. The Reverie is an event that happens every four years. World leaders gather together to discuss current events relating to the state of their countries. They then decide what actions to take to maintain peace in the world.

Pirates and piracy is always part of their discussions, since pirates are the ones who usually cause chaos. According to the spoilers spreading in social media, the kings of Alabasta and Dressrosa complained about the Warlord system.

Warlords or Shichibukais are incredibly strong pirates who are given freedom of the government. In return, they are required to fight for the government whenever they are called. We’ve seen this happen in the Paramount war and in the movie 3D2Y when a notorious pirate, Brynndi World escaped from Impel Down. 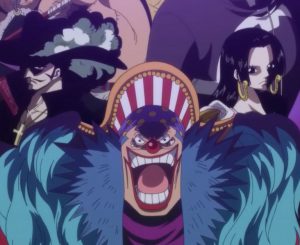 As a group, the Shichibukai are one of the three great powers that keep the world in balance. There are seven Shichibukai sanctioned by the government. The following is a list of the current Warlords. I will also include the former Warlords for reference to Alabasta King’s complaint.

1. Dracule Mihawk – also known as Hawkeye Mihawk, he is titled the strongest man in the world. Before the time skip, Zoro trained under him in his castle. He is a solitary man with no known pirate group and used to be Shanks’ rival.

2. Bartholomew Kuma – originally a commander in the Revolutionary army. He joined the Shichibukai to spy on the world government’s movement. Later he became Vegapunk’s subject and model for creating Pacifista, a cybernetic unit shooting beams.

Kuma was also turned into a cyborg and is now being used as a slave by the Celestial Dragons.

3. Boa Hancock – Captain of the Kuja pirates and Empress of Amazon Lily. Her beauty is known to parallel no one in the One Piece world. When Luffy was sent by Kuma to Amazon Lily, Boa fell hopelessly in love with him. Boa helped Luffy infiltrate Impel Down and protected him during the Paramount war.

He enslaved the country turning anyone who fight against him into living toys. The process erases memory of the person turned into a toy. Doflamingo manipulated the people of Dressrosa for his gain.

When the newly formed alliance between Luffy and Law came to Dressrosa, they put an end to Doflamingo’s schemes, freeing the country. The new Navy Admiral Fujitora witnessed everything and this made him determined to abolish the Warlord system.

5. Edward Weevil – self-proclaimed only biological son of the late Whitebeard. Little is known about him or his origin. He has a white crescent mustache similar to that of Whitebeard, and like his alleged father, Weevil wields a naginata as a weapon of choice.

6. Buggy the Clown – the first pirate captain defeated by Luffy in East Blue. He also collaborated with Luffy in escaping Impel Down and in trying to save Ace during the Paramount war. Buggy is a cowardly pirate who takes credit for others accomplishment, but somehow his presence proves useful.

It was later revealed that he once was crewmate with the Yonko Shanks in the Pirate King’s ship. 7. Trafalgar D. Water Law – he is one of the twelve pirates known as the Worst Generation, also termed as Supernova. Law became a Shichibukai during the time skip by delivering one hundred heads of notorious pirates to Navy Headquarters.

His position as Warlord was revoked for allying with the Strawhats and taking down Doflamingo. Gecko Moria – rumored former member of the Rocks pirates, his work is making an army of zombies. He seems to have some grudge against the Yonko, Kaido, and he plans to use his zombie army to take revenge.

Moria was thought to have been killed in the Paramount war, but he made appearance post time skip in Pirate Island which serves as Blackbeard’s hideout.

Marshall D. Teach – also known as Blackbeard, he became a Shichibukai after he delivered Ace to the Marines after their battle. Using his title as a Shichibukai, he inflitrated Impel Down and free some prisoners who became part of his crew.

He then crashed into the paramount war, killed Whitebeard, stole his devil fruit & became the new Yonko.

Jinbe – he is a fishman who agreed to join the Shichibukai to gain favor from the world government in order for their kingdom to be recognized. He later retired as Shichibukai and helped Luffy save Ace. Later he became a part of Big Mom’s crew then left and joined the Strawhats. 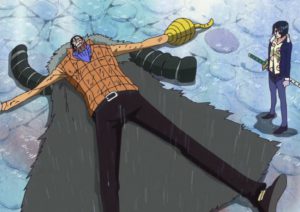 Crocodile – former president of the crime syndicate Baroque Works. The aim of his group was to overthrow Alabasta kingdom and taking the throne. But it was only his cover, since his real purpose was to get hold of an ancient weapon powerful enough to destroy the world.

The chaos he caused in Alabasta kingdom motivated King Cobra to complain about the Warlord system.

The Hunt for the Warlords of the Sea

During the Revirie, King Cobra and King Riku voiced their previous difficulties caused by the government sanctioned Warlords. In chapter 956, it will be confirmed that their complains will be the main reason for the abolition of the Warlord system of the government.

Navy Admiral Fujitora also came to the Revirie to express his disagreement with the Warlord system. He believes that Shichibukai are nothing more than pirates who can’t be trusted. His desire came to fruition during the Revirie.

After the abolishment of the Warlord system, the marines sent hundreds of ships to hunt and take down the Warlords. A leaked photo shows Mihawk smiling. Fans believe that it is because he missed being hunted and fighting. This act will surely bring great changes in the world now that one of the three great powers is out of the picture.

Many fans speculate that three of the Warlords will be forming alliance with the Strawhats. This could include Law who already formed an alliance with Luffy, Boa Hancock, and maybe Buggy the Clown. But they are yet to be revealed in the coming chapters. 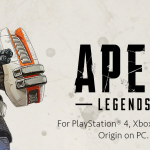