In the past two weeks, we published multiple insights about the upcoming One Piece chapter 954 (see here, here, and here). And today, we are again bringing you a tidbit, which focuses on why Hawkins joined Kaido. So without any further ado, here’s what we want to share with you:

Just a few hours upon arrival at Wano, Luffy now reunited with Zoro, were confronted by Hawkins, one of Kaido’s elite group of strong pirates leading a portion of Kaido’s army.

Fans were thrilled to see that Hawkins, a pirate from the worst generation who previously formed alliance with Kid pirates and On Air Pirates led by Scratchmen Apoo, is now working for Kaido. Hawkins is responsible for the capture of the band of samurai who heeded the call to join in the fateful battle to retake Wano. Apart from the samurai, Hawkins also got hold of Law’s crew making them his ‘extra life’ using the power of the Straw-straw fruit.

This puts Law in a very challenging situation. In chapter 954 however, we will see both Hawkins and Law covered in blood. Clearly a battle to death has just concluded and Law can be seen with his sword in Hawkins’ throat.

At that moment, Hawkins reveals to Law how he became one Kaido’s subbordinates. He reviews how Kaido fell from a sky into the island their pirate alliance with Kid and Apoo has chosen as their base of operation.

It is further revealed that Apoo was already under the Emperor’s umbrella and that he may be the cause of their demise. Using his cards, Hawkins predicted that their rate of survival is zero if they choose to fight or flee. He tells Law that the only obvious option is joining Kaido. Kid and killer however fight Kaido until they were no longer able to move, and eventually became captives.

Upon hearing the story, Law withdraws his sword and sensing a wanting of revenge and conspiracy against Kaido, Law tells Hawkins that he will join him. 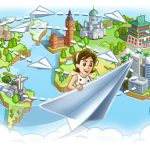