Samsung has two flagship smartphone lineups – Galaxy S and Galaxy Note. Exactly 20 days ago, they released a couple of new devices as an expansion of the Note series. Being the top-end offerings, both of them come bundled with everything best Samsung has ever provided.

Galaxy Note 10 and Note 10+ differ in many departments. As for the optics, the former features a triple camera setup on the back whereas the latter does a quad camera one. Concerning the physical dimension and display size, the Plus variant comes on top, as is often the case with the pro/+ variants.

Not long ago, the OEM’s quest to land on the perfect Android overlay turned out true with the introduction of One UI. And, just like other manufacturers, Samsung added exclusive features to woo their customers. Game Launcher is one such functionality we can find even on their budget devices.

As smartphones get muscly with powerful inside specs, developers are coming up with intensive titles. That’s what drives the brands to unleash their own services to smoothen the gameplay and defy the competition (take OnePlus’s Fnatic Mode, for example).

Game Launcher gives a one-stop place for all the games on Samsung phones. Not only does it gather every title at a single space, but tunes the performance and hides the incoming alerts as well. Using Game Launcher is no pain in the neck after enabling it. 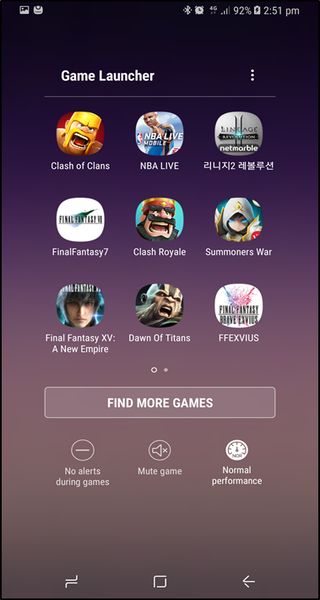 However, reports about the omission of this feature from some Note 10+ are surfacing lately. Users have confirmed they can’t spot Game Launcher in the Settings on their AT&T branded units.

On further investigation, we came to know, this-service-as-a-separate-option is absent on AT&T units. Disappointing is the fact that Game Launcher works the same way as it used to, on other variants including the unlocked ones from the same carrier.

You can still boost a gameplay session. While launching a title, you get to fiddle with different attributes by swiping down from the top. But the convenience to have every game under one roof, well, that’s gone! What if you have grown to like Game Launcher on your previous Samsung device? There’s workaround to get it on your Note 10+. You need to sideload APK from a reliable site like APKMirror. It will work just like the inbuilt solution does.

As for AT&T’s take on the matter, Note 10+ uses who got in touch with support were informed the carrier would never alter the firmware. We couldn’t trace the exact reason for why the feature is missing only on AT&T variants on Note 10+, as other carrier-branded units have the feature. Maybe, an OTA update will make amends.

P.S. You can read more of our Samsung-related stories here.