Gone are the days, when Nokia used to be the favorite smartphone vendor in the world. Nowadays, it seems the Finnish company struggles to stand against the competition in the budget-phone segment in terms of features and value for money.

But we won’t deny accepting the fact that Nokia is one of the brands in the market, which promises and delivers the fastest Android updates. Other than fabulous and sturdy design, great software is a significant feature in Nokia devices that attracts a plethora of customers.

Recent Nokia devices (like Nokia 9 Pure View, Nokia 8.1 and others) are powered by Android One (excluding the Chinese units of course). Which means, no software bloat, and faster Android updates. Android One is the only feature that helps the OEM to sustain itself in the highly competitive market.

Nokia 6.1 users also got its benefits. The phones has been getting regular security updates since launch, last year. And this year is nothing different, as after OnePlus, Xiaomi & Google Pixel, Nokia joins the club to roll out the latest August Android security patch to Nokia 6.1 and other devices.

Nokia 6.1 is the HMD’s 2018 mid-ranger fueled with Snapdragon 630 SoC. Shipped originally with Android Oreo, this Android One powered phone was upgraded to Pie within the launch year itself. Cut to now. The device is receiving the current and newest Android security patch.

The latest Nokia 6.1 August update, with a size of 136.6 MB, bumps the software version to V3.54l. Other than the latest security patch, the new update introduces several changes to improve the system stability and significant user-interface enhancements.

FYI, Nokia 6.1 is not the only Nokia device to join the August security patch party. Users across social media platforms are also posting about the August update notification on Nokia 3.2 – HMD’s current year low-end phone powered by Snapdragon 429 processor.

The currently circulating August update on Nokia 3.2 carries version V1.39D. The update file is 1.2GB, and just like the Nokia 6.1 patch, it brings enhancements in system stability and UI.

It goes without saying, firmware updates are usually pushed in batches, so the August security patches may take time to hit all Nokia 6.1 and 3.2 phones. So hang in tight, as you may get to see the update notifications anytime soon. Happy installing!

Due credits for covering this news: Anubhav Tyagi 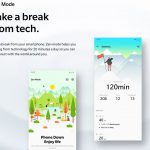