Very few Android OEMs maintain a proper public beta channel for evaluating their upcoming updates within a small group of people as a pilot survey. China’s Xiaomi is one of them, and these guys have 4 major channels of MIUI updates: Chinese (beta/stable) and global (beta/stable). However, the Chinese OEM announced to close down the public beta branch on and from July 1. According to them, only a small number of beta users actually report the bugs; most of them use the beta channel for testing out new features and quick updates.

Xiaomi’s master plan is to speed up the regular stable channel update, and retiring the open beta is the first stepping stone for this proposition. For the same reason, they opt for the staged rollout model – even the stable update is held back for a while under a ‘Stable Beta’ tag and distributed gradually. Q : How is this different from Stable release?

A : Nothing much. This is just a pre-rollout of the Stable release. This is given to random users for getting feedback. If everything goes well, it should be available to general public soon.

While such safety measures are indeed useful to avoid incidents like accidental bricking, they do create confusions among regular users. For example, the recent most stable update (MIUI 10.3.5.0) for Poco F1 can’t be installed by a huge number of people, as Xiaomi doesn’t allow them to sideload the ‘beta’ update.

It’s been more than a week since the release of this June update for the Pocophone F1. The time period is long enough to declare the build as stable, but is there anything fishy going on?

Well, technically yes! Alvin Tse, head of Pocophone Global, has officially confirmed that this particular build has been temporarily suspended due to a noticeable low speaker volume glitch. As a matter of interest, the long standing in-call echo issue in the Poco F1 was reportedly resolved in this 10.3.5.0 build. But looks like Xiaomi engineers unintentionally broke another component, which resulted in the low speaker volume bug in some regions.

It will come, please wait. Some countries reporting a lower speaker volume so some builds are being held back and patched before rolling out.

We are not not sure whether the company will launch a completely new build accompanied with a small hotfix for users who already installed the 10.3.5.0 update or they try to fix the issue by server side changes. Nevertheless, we will notify our readers as soon as there is anything new on this matter.

According to Alvin, the company is planning to re-release the 10.3.5.0 update for the Poco F1, tentatively in this week. Xiaomi is currently rolling out the update to 30% of the Poco user base as a pilot.

Releasing the newly patched stable to 30% of the user base first. Once the low sound speaker issue is confirmed as fixed, then we will release to rest of user base.
(Source)

On the other hand, manually flashing the full update zip is reportedly useful as a Poco F1 low volume workaround. 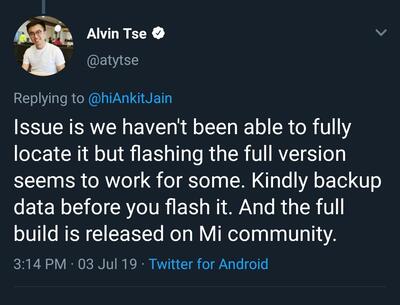 Alvin now says the roll out should get complete by this week. Here’re his exact words:

It should roll out to rest this week. Once live, you can check the full build on Mi community

Pocophone global head Alvin has today formally announced that the Poco F1 10.3.5.0 June update has again started rolling out. It contains fix for the low speaker sound issue. Following is what exactly he said: