And soon after receiving the patch, users with these devices began complaining (and continue to do so till date) about not being able to use WiFi and Hotspot at the same time. Xiaomi users basically say they aren’t able to use hotspot while connected to WiFi anymore after Pie.

Lots of Redmi Note 6 Pro and Redmi Note 5 Pro users can bee seen complaining about this across Mi Community and Twitter. Here are a some of the reports for you to take a quick look at: 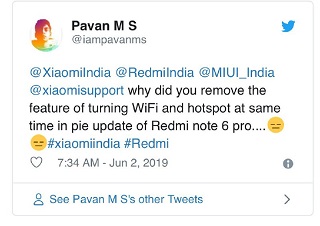 As Kingshuk from our team stated in their coverage on the matter, Google added the WiFi sharing feature silently in AOSP. But it appears Xiaomi’s implementation of Android Pie created some issue with Google’s native code base, which in turn ruptured this feature and left users complaining.

Well until now, there was no clarity as to whether this was an intended change or a broken functionality that got instigated with Android Pie. But now a Mi Community moderator has pitched in saying Xiaomi devs have been made aware of this issue and the problem will be fixed soon.

For clarity, this information is coming from a forums moderator, someone who may or may not be a company employee. But as they are usually aware of what’s going on internally, it is safe to assume the concerned team is working on resolving the WiFi sharing problem triggered after Pie.

Here’s what the forums moderator said while reverting back to a Redmi Note 6 pro user recently:

This issue has been reported to the developers and will be resolved soon.

So those of you who have been encountering the WiFi and hotspot related glitch that we’ve discussed here, hopefully you’ll get to see a solution soon. Though there’s no ETA for that. Rest assured, we are keeping a close watch on the matter and will update the story as and when the promised fix gets live.

And for more Xiaomi-related news and stuff, interested readers may head here.