While that’s good, sadly, the company has now decided to discontinue Redmi Note 7 for India. In fact, Note 7S will be replacing Note 7 in the region. The information came straight form Xiaomi’s Product PR on Twitter (Note: we’ve detailed the differences between Redmi Note 7S and Redmi Note 7 here). 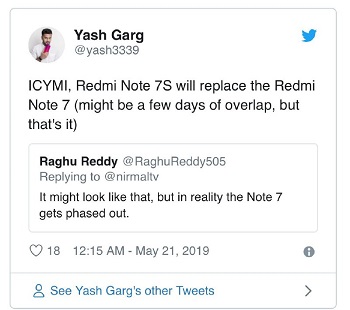 It’s worth mentioning that Xiaomi released the global and Chinese variants of Redmi Note 7 with a 48MP primary rear camera sensor (by Samsung), while the Indian variant came with a 12MP camera sensor by Sony.

However, now the new Redmi Note 7S that’ll be replacing Note 7 in India will also embrace a 48MP camera sensor by Samsung, similar to the global and Chinese variants of Redmi Note 7.

Well, there’s a lot that has been going on regarding Redmi Note 7 these days. Leave aside the sad news of the device’s production phasing out in India in the coming days, we have at hand a good news that Redmi Note 7 phone owners at least in the Indian region have been eyeing on.

But things are changing, as now Redmi Note 7 (India) will also be getting updates under MIUI 10.3.x branch. Coming to the MIUI 10.3.5.0 (PFGINXM) update (sized ~700MB) that’s currently rolling out on Redmi Note 7, it brings in the latest May security patch.

After querying Xiaomi’s Update Server (with yshalsager’s Xiaomi Firmware Updater), here’s the change log that we could get hands on:

Lockscreen, status bar, Notification shade
Optimization: You can open Home screen using your fingerprint after your face data is verified
Camera
New: New modes for AI camera
Fix: Camera force closed when the app was closed and opened again in the Video mode
Fix: When the user canceled making a photo using a shortcut in Messaging and then tapped the Camera shortcut again, Camera crashed
Settings
Optimization: Big fonts are displayed better now

Going by the information that we have and the changelog that has been shared by some of the users who received the update in the first wave, MIUI 10.3.5.0 adds new modes for AI camera, along with making camera enhancements, other optimizations and some bug fixes.

Apart from what is stated in the changelog, one of the Redmi Note 7 users also shared that after the update, the options to enable Dark mode, hide notch and Face unlock for apps – that weren’t available earlier – have also been added.

Here are the user shared images displaying the new options (click on the image/s for enlarged view):

Well, that’s a lot of new features, optimizations and bug fixes included in a single update. As the update will be rolling out in stages, those of you who haven’t got it yet can download using the following information:

And once you install, don’t forget to let us know how the update acts on your unit.

Looks like the update was rolled out for limited users only. Here’s what the Mi Community device team’s member recently told a user who was complaining about not receiving the update:

currently it was rolled out for some time only, will be back soon

P.S. For more Xiaomi-related new and stories you may head here.

Next article Xiaomi MIUI 10 Global beta 9.5.23 update is now out