The partnership between T-Mobile and OnePlus is proven to be quite useful to establish the brand identity of the smartphone maker in the soil of the United States of America. Changing the notion from ‘yet another Chinese OEM’ to ‘we want a OnePlus’ was hard, but not impossible.

In an interview with PCMag, OnePlus CEO Pete Lau disclosed that the OnePlus 6T had seen a gigantic 249% boost in the first 30 days sales in the USA after the T-Mobile deal, compared to the regular OnePlus 6.

As a obvious consequence, the Shenzhen based phone maker entered among the top five OEMs in the premium segment (initially in the US, later globally) for the first time. No doubt that OnePlus is targeting the lucrative market of the USA. Their recent policy proves the speculation, as the OEM decided not to bring the budget friendly regular variant OnePlus 7 in the North America.

Once again, T-Mobile is the exclusive wireless partner of OnePlus to carry the OnePlus 7 Pro. But are you aware of the not-so-publicly-known limitations of the T-Mobile branded Pro variant of the OnePlus 7?

Don’t worry, because we have listed them here:

The unlocked variant of OnePlus 7 Pro is available in the following configurations:

However, T-Mobile customers can only get their hands on the 8/256 GB variant.

The OnePlus 7 Pro from T-Mobile comes with 256GB of internal storage, 8GB RAM, a 16MP popup front facing camera, 48MP + 8MP + 16MP rear cameras, a quick-charging 4,000 mAh battery that gets you up to 50% battery power in just 20 minutes, dual speakers, fingerprint under display functionality and a 6.67-inch Fluid AMOLED screen.

Moreover, their choices are limited to Mirror Grey and Nebula Blue colors. On the other hand, users who opt for the global or US unlocked models can pick the subtle variation of Almond as a bonus.

Except 2014’s OnePlus One, every single OnePlus phone supports dual SIMs. The inclusion of an extra SIM slot is invaluable for users like multiple carrier connections holders or frequent travellers.

The OnePlus 7 Pro available on OnePlus.com are dual-sim. The ones available at TMO are single SIM.

The limitation was present in the previous year’s OnePlus 6T as well. Interestingly, the shortcoming is rather software imposed, as one can buy a third party dual SIM tray and flash the unlocked firmware on the T-Mobile model to use two SIMs simultaneously.

OnePlus phones are known for their easy unlockable bootloaders and broad carrier compatibility. However, the carrier exclusive model is by-default locked with T-Mobile network. The bootloader is locked as well, and one should ask T-Mobile for an unlock code. Although T-Mobile representatives are usually helpful, their system is not compatible with unlock code generation for the OnePlus 7 Pro as of yet.

The phone should be locked to the T-Mobile network until the device is paid in full and utilized on their service for 40 continuous days. Only after SIM/network unlocking, a user can opt for bootloader unlock. On the other hand, if you order the phone directly from OnePlus, you are free to use any SIM (except Sprint).

Carrier branded phones are known for getting delayed software updates, compared to their unlocked counterparts. OnePlus 7 Pro is not an exception, as the T-Mobile variant is still on March 2019 security patch even after the day-one OTA update (unlocked models are on April).

They even removed the ‘Local upgrade’ option, so there is no easy way for end users to manually flash update packages.

Experimental features like DC dimming is absent from the T-Mobile modified software as well.

Excited about bleeding edge functionalities? Like to feel the thrill of testing upcoming version of Android on your phone?

Alas, the T-Mobile is not compatible with any of that! Yes, you heard that right. While the regular unlocked OnePlus 7 Pro is eligible for OxygenOS Open Beta testing as well as Android Q beta testing, the T-Mobile model doesn’t support neither of them.

Our job is done here. Now it’s time for you to think carefully: whether you should opt for the carrier branded phone or buy the unlocked variant directly from OnePlus. 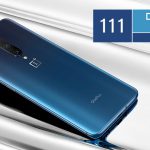