The key highlights of the refreshed design are the new navigation bar (that’ll display turn-by-turn directions and let users control their apps just with one tap), the Dark Theme that comes along with new fonts and colorful accents, and an improved notification center with more available actions. But while the company is busy enriching the service to offer users a level up experience, some of the existing functionalities have lately been acting glitchy as we’ve reported in our earlier coverages.

For a quick refresher, just last week we brought to focus an Android Auto issue where while launching Google Maps on the car’s head unit, users get to see a blank white screen instead of maps. Though the head unit screen goes blank, driving instructions keep coming. Apart from Google Maps blank screen, some users also complained of a white bar sitting at the top of the head unit screen that shifted the actual screen downwards because of which options on the lower side went missing (as can be seen in the following user shared image). Then yesterday, we pointed out another problem wherein a lot of Android Auto users have lately been facing connectivity issues. They say Android Auto just doesn’t launch on the car’s head unit when connected with phone over a USB cable, though the phone continues to charge.

In some cases, users got an error saying “Could not connect. Please check if the mobile device supports Android Auto” (as can be seen in the image below). Coincidentally, all three problems – Google Maps white screen bug, white bar on top of display as well as the connectivity issues – reportedly instigated after Android Auto’s March update that bumped the version to 4.1.590944.

As if that wasn’t enough already, now we’ve caught sight of a different problem that also reportedly got triggered after the same update. Quite a bugful update if I may say so. Here’s how some affected users word the problem behavior:

When I use Android Auto (with my 2019 Subaru Crosstrek) and say “ok google, play pink”, it will start to play for about 5 seconds and then it just stops/pauses. This is a new behavior, just noticed it within the last month.

EXACTLY the same. Will play 5 seconds (or so) of the song and then just stop. Get the same error message. “Google play music doesn’t seem to be working right now.”

I have the same issue. After selecting a playlist in Google Play Music, the song plays for 5 to 10 seconds and then stops.

Just before you think this issue might have to do with Google Play Music instead of AA, let me tell you that other music apps like iHeartRadio and Spotify also behave in the similar manner and throw an error saying “app name” doesn’t seem to be working right now, after playing music for some seconds.

Following are some user shared images of the notification they encounter while using other apps: 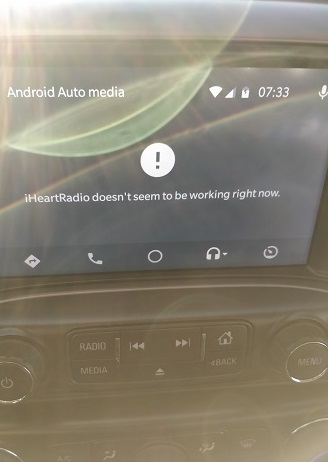 Apart from the company’s official help forum, reports can be seen posted across online discussion platform Reddit as well.

Apparently, it’s an issue with Android Auto while using music apps. It’s worth mentioning that majority users who face the issue either have a Samsung device (like Galaxy S8/S9/S10/S10+/S10e) or OnePlus unit (such as OnePlus 3 or 5T).

Additionally, users running the app’s later version i.e. the April patch (4.2.591444) also encounter the same problem. One of the complainants even confirmed that the Android Auto app without even connecting to car’s head unit also replicates the same behavior. Here’s what they said:

Even without connecting to the Android Auto in the Car, we can verify by opening the Android Auto app from mobile and click on music and it will through the Following error :
Spotify doesn’t seem to be working at the moment

While reports continue proliferating, users have shared a couple of workarounds (device specific) that appear to help.

Users with Samsung devices can give the following workarounds a try:

Affected OnePlus user can resolve the issue with following steps:

Just in case you’ve been facing the music-related issue discussed here, give these workarounds a try and see if that helps. And yes, don’t forget to let us know how it goes by dropping a comment below.

P.S. For more bugs/issues, news and stories related to Android Auto, you may head here.