ZenFone Max Pro (M2) that was launched in India a few months ago is one of ASUS’ mid range smartphones that shipped with Qualcomm’s Snapdragon 660 SoC and Android Oreo (8.1), and was upgradable to Pie (9.0).

What’s good is that Max Pro (M2) device owners didn’t have to wait for long for upgradation as just yesterday the main stream tech media highlighted that the device has now started receiving this year’s Android OS i.e. Pie.

Despite releasing in the month of April, this Pie update dubbed version 16.2017.1903.061 brings along the March security patch instead of the latest one.

But looks like this Android Pie update on Max Pro (M2) is off to a bad start as users are rushing to social media platforms to draw attention to the bugs that the update has brought along.

Take a look at what some of the disappointed users have to say:

Lets take a look at what has left users complaining.

Right after the Pie update got rolling, Zenfone Max Pro (M2) users started chiming about weird and continuous screen flickers on their units to an extent that they can barely use their phones. See for yourself how some of them word the problem behavior:

After PIE update ASUS Zenfone max pro M2 screen is blinking continuously. Phone is not at all usable. PLEASE FIX THIS BUG ASAP. Didn’t expect this kind of poor update from ASUS.

Yeah! it is so irritating! They are stupid, as soon as it happened i have been in chat with official customer care of ASUS. They troubleshooted my device and also suggested to perform factory data reset, i did it But no use! the problem still persists.

Multiple threads have been posted across ASUS Zen Talk (company’s official help forum) since the Pie update got live. Twitter has the same story. For a quick glance, here’s a selection of some of the recent tweets with users complaining about the screen blinking or flickering issue:

Similar reports can be seen on the online discussion platform Reddit and XDA.

A couple of affected users even grabbed and shared videos of the glitchy screen flicker behavior.

Well the problem is indeed irritating and with screen flickering in like every three seconds it must be difficult to even use the phone.

Coming to whether ASUS is even aware of the problem in question, apparently yes they are.

Amid the long string of user reports on the official help forum, a few hours back, one of the moderators informed the affected users that the issue has been brought to the concerned team’s notice. They said:

We have highlighted this issue. 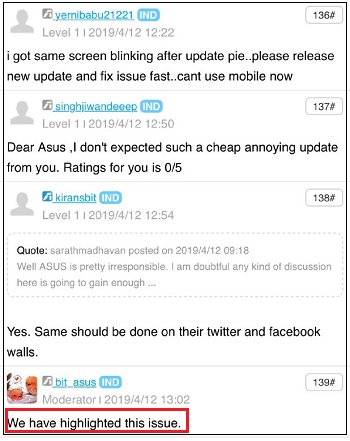 With that coming from a forum moderator it’s safe to assume that ASUS has been made aware of the screen flicker or blink glitch that got instigated by Pie. But there is yet to come an official confirmation about the fix. Though we hope that also comes soon.

Rest assured we are keeping an active tab on all related developments and will update the story as and when anything new comes to our notice.

In the meantime, if you are also encountering screen flickering or blinking on your ZenFone Max Pro (M2) after installing Android Pie, drop a comment and let us know.

What’s not being reported is that service centers are now suggesting users to downgrade to Oreo to get rid of the screen flickering problem.

One of the complainants even shared that they were told by customer support to wait until today (i.e. April 15) for the issue to be fixed.

I contacted customer service and they told me to wait until 15april for the fix on blinking issue.

An Asus forum moderator has recently confirmed the flickering issue is being investigated.

We are investigating the flickering issue 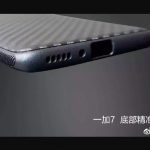 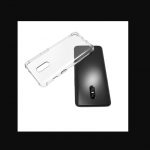