Chinese smartphone maker Xiaomi is enjoying a tremendous growth, especially in emerging markets like India. In 2018, they let alone shipped a whopping 41 million units which was 30% of the total Indian smartphone market.

Even Samsung couldn’t defend their throne as Xiaomi took the pole position in India. In terms of Global competition, the Chinese OEM literally started a war against Samsung by announcing Mi 9 on the same date of Galaxy S10 release.

Powered by the top end Qualcomm Snapdragon 855 SoC, Mi 9 houses a triple rear camera setup with a 48 MP primary shooter. The phone supports up to 8 GB of RAM and 128 GB of internal memory (12 GB / 256 GB in case of the ‘Transparent Edition’).

Reader may remember that the shape of the notch in the retail Mi 9 was quite different from the official renders. After a short-lived controversy, Xiaomi released an update with a custom overlay to ‘resize’ the actual half-circular notch to more like a water drop.

Software vs. Hardware notch on the Xiaomi #Mi9.... how weird is that.... pic.twitter.com/gSor9gcj5z

It may sound complete oxymoron to change the physical shape of the notch with a software update. The actual trick lies in the AMOLED display of the Mi 9.

In case of AMOLED panels, it is possible to achieve the ‘true’ black as the pixels don’t consume any power to display the black color tone. Xiaomi engineers exploited the fact and padded a bunch of nearby pixels of the physical notch to emulate the water drop design.

Anyway, it’s hard to satisfy everyone.

Some users rather prefer the half-circular design compared to the water drop one. They reached out to Xiaomi via official forums.

So in a recent MIUI update on the Mi 9 they changed the notch design by turning off the pixels. I’m trying to understand what was the reason behind this because now it seems like a OnePlus 6T. Like apparently fans complained about the original notch.

I want the original not a notch that has been ‘polished’ apparently. I’m hoping in MIUI they give us the option to change it the way we want it. What do you guys make of this?

At the end of March, Xiaomi started to push a new OTA update (V10.2.16.0.PFACNXM) for the Chinese Mi 9 users. Apart from typical system stability fixes, this new build brought support for manually controlling the shape of the notch.

The arrival of the update was reported by Mydrivers.com. An automated translation of the changelog says the following:

Now Xiaomi is pushing new OTA builds for global (V10.2.6.0.PFAMIXM) and European (V10.2.17.0.PFAEUXM) Mi 9 models as well, which give end users the same freedom of choosing the notch shape dynamically.

FYI, the global and European builds are different for Mi 9, so you can not cross-flash the builds without unlocking the bootloader.

These builds are currently rolling out in stages, so you need to wait for your turn. As an alternative, grab them using the direct download links – credit goes to Youssif Shaaban Alsager aka yshalsager and his spectacular Xiaomi Firmware Updater project.

After downloading the appropriate build, use the built-in system updater to flash the full update zip. You need to tap the ’10’ logo a couple of times to unlock the flashing option.

Unlike Mi 8 (codename: dipper) and Mi 8 Explorer Edition (codename: ursa), the regular and the Transparent Edition of Mi 9 share same firmware. Thus you may use the same package to update the higher end model.

Which shape of the notch is preferred by you? Let us know by commenting below. 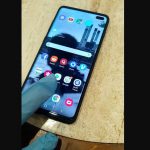