They named it Android Go.

Later that year, Google unveiled more about this alternate distribution. Tailor made for devices with 512 MB or 1 GB of RAM, Android Go came packed with many under-the-hood changes at the operating system level.

Google also published Android Go-optimized version of many popular applications – for example, YouTube Go, Gmail Go, even the Go variant of Google Assistant. They are comparatively lighter than their full blown versions. As a matter of fact, Google introduced a dedicated low RAM mode with the release of Android 4.4 KitKat. Some of the relevant platform optimizations are as follows:

– Kill cached processes if about to be uncached and too large.

– Don’t allow large services to put themselves back into A Services (so they can’t cause the launcher to be killed).

– Kill processes (even ordinarily unkillable ones such as the current IME) that get too large in idle maintenance.

– Serialize the launch of background services.

With Android Go, Google went one step further. On top of the existing low RAM mode, they incorporated a modified version of low memory killer and runtime optimizations to ensure smoothness without sacrificing performance. 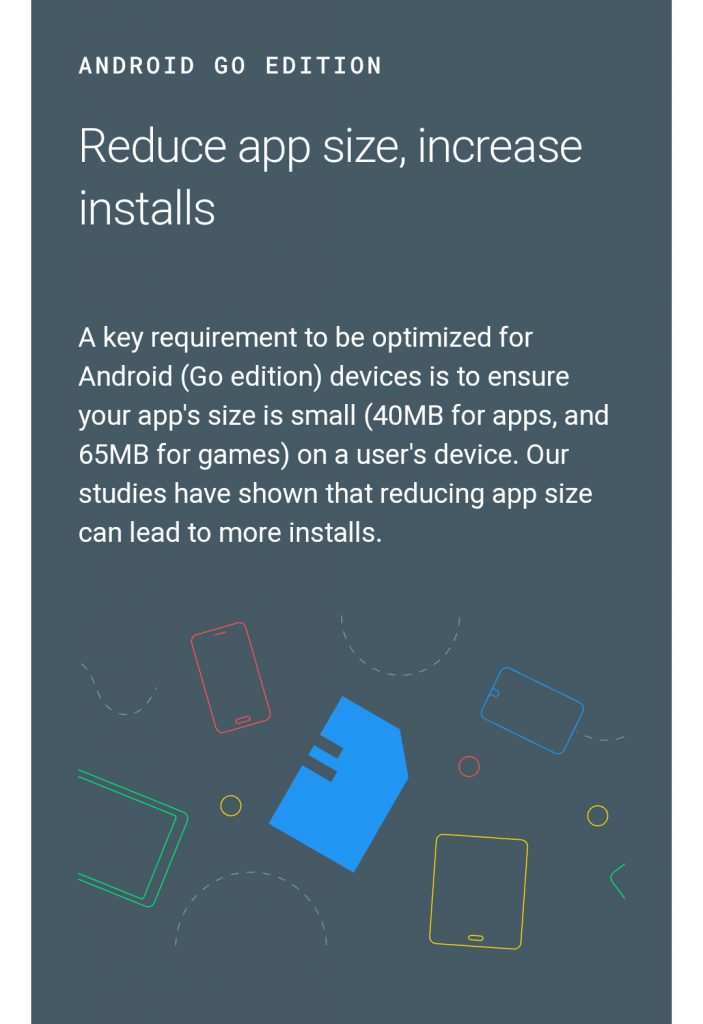 The adoption rate of Android Go, however, did not meet Google’s expectations. Major OEMs like Nokia, Samsung or Xiaomi released Android Go powered phones, but the market penetration was below average. Nokia 1 was the first Android Go phone from Nokia

The price-performance ratio was a major deciding factor behind the lack of adoption. Google initially targeted third world countries as the primary market for these phones. But local OEMs and in some cases, bigger players like Xiaomi itself became their own contenders. Google put a hard restriction on the upper limit of the RAM size (1 GB) as one of the eligibility criteria. For that, OEMs can’t ship many phones with entry level hardware configs with Android Go tweaks. Meanwhile, phones like Redmi 5A steals the show.

The emergence of KaiOS as a capable operating system for budget-friendly feature phones is another obstacle in front of the Android Go initiative. In a recent IDC study, analysts tried to spot the gaps faced by Android Go powered phones against the feature phones. According to an analyst of IDC,

For Android Go, there has never been such a loud voice earlier from brands like Nokia, Lava, Micromax, and the likes, or from Google’s end for pushing the Android Go devices. Because of this, there was no marketing initiative.

Even in the retail stores, you won’t see promotional counters that talks about how important an Android Go phone is for the entry-level buyer.

Android Go is also plagued with the lackluster slow pace of updates. It may sound completely illogical, but OEMs are still launching new Go phones with Android 8.1 Oreo – whereas Android 9.0 Pie was announced more than 7 months ago!

For example, Samsung is going to release Galaxy A2 Core with Oreo. It would be the third Android Go phone from the South Korean OEM, after Galaxy J2 Core and Galaxy J4 Core – all running Android 8.1 Go. Meanwhile, Google pushed the first developer preview of Android Q on March 14. Quite contrasting, isn’t it?

Announcing #AndroidQ Beta! The latest release of Android sets you up to take advantage of a range of new experiences, from foldable devices to performant gaming to stronger protection for your users.

We actually stumbled on an interesting article posted by Flame Group, an organization of OEM/ODM-manufacturing of consumer electronics in China and Europe.

Google Increase Lifetime of Android 8 Go Edition based on reports from brands and manufacturers.https://t.co/F2yq3IfEdI pic.twitter.com/65NznyEYlR

According to them, Android 9 Go edition has been suffering from numerous performance issues. Google is aware of the issue and has decided to extend the timeline of GMS approval for Android Oreo based Go edition.

After internal testing, and extended discussions with some of the manufacturers’ engineering teams, Google understood these regressions stem from some of the graphics improvements developers made for the higher end devices.

Google is beefing up their steps to ensure such performance impacting changes are caught well in advance on the low-end devices in the future Android releases. As such, Google will be extending the GMS approval window for Android Go on Android 8 (Oreo) to October 31, 2019.

Qualcomm is working on a new super low-end SoC called QM215, that will likely be found in a new generation of #AndroidGo smartphones (reference design device has 1/2GB RAM, 8/16GB Flash, HD+ screen). Could be "outside" of Snapdragon range: https://t.co/92s7re9H8v

Interestingly, Mishaal Rahman (XDA Editor-in-Chief) discovered the Flame Group article back in February. Later on, he got a reply from the official Flame Group Twitter account, assuring the authenticity of the claim.

Yes, this information double confirmed by all authorized laboratories. Lifetime of Oreo Increased

At this moment, we can not speculate anything new without any official word from Google. Looks like Android Go has got another nail in its coffin. ?