The Samsung Galaxy S10 series was officially launched worldwide last week on March 08. As more and more people are starting to use these phones, more use cases are getting tested, and apparently some of them slipped through Samsung’s QA filter net.

Just got my S10. Tried using it with my polarized Ray-Bans on, and the screen is basically unviewable

I just received my new S10 a few days ago, loving it except for one pretty annoying issue. Anytime I wear my polarized sunglasses, the display on the phone appears to distort and the color on the display gets very tinted, to the point where I can’t see it with my sunglasses on

I’m loving my new S10, it’s my first Samsung phone but I’m surprised at how awful the screen looks when wearing polarized lenses. There’s a super yellow tint with them on and its purple when using in landscape mode to the point where it’s unusable

While some users are facing this annoying issue in both portrait and landscape modes, others say the problem rears its ugly head only in one of the modes. Complaints related the matter can be found on Reddit, Samsung Forums, and other third-party forums.

Some users also went ahead and shared pics showcasing the issue. Here are a couple of images (click/tap to view full size): 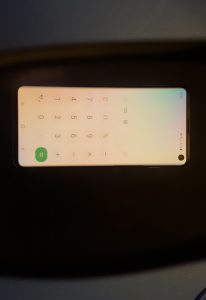 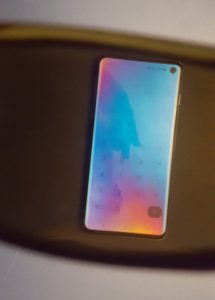 These particular images were captured through polarized sunglasses and as you can see, the view of the Galaxy S10 display is extremely hazy.

Later, some users found that this problem went away by removing the screen protector that came bundled with the Galaxy S10 series phones. Here some reports regarding that:

I removed my screen protector today, and the distortion in portrait and landscape mode is gone

I noticed the same thing on the way into work this morning. The screen protector is responsible for the color effect

Some complainants even presented proofs to backup their claim of this being a screen protector problem. For example, one user placed the screen protector on their computer monitor, and clicked two photos of it – one normally, and other through their polarized sunglasses.

This is definitely an issue, for a 1200$ phone to have such a crappy screen protector installed, what a shame samsung!!! please view the images below so you can understand what your customers are talking about. This is the screen protector from an s10+, placed onto my computer monitor. One picture is the normal view, the other picture is what it looks like through my Maui Jim Polarized sunglasses. This is unacceptable in my opinion! In other case, a user peeled off the Galaxy S10 screen protector from some area of the device’s screen, and then took an image. Take a look: 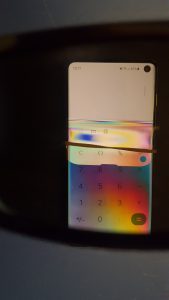 Given all these proofs shared by users, it’s reasonable to say the screen protector that comes bundled with the Samsung Galaxy S10 series phones doesn’t play well with polarized sunglasses. And if you’re facing such a problem, you should take off the screen protector.

It’s worth mentioning that we also came across reports from some users who said they are facing no issues when viewing their screen protector clad Galaxy S10 phone through polarized sunglasses, but such reports have so far been very few.

On the other hand, one user showed photo proofs to say that even after removing the screen protector, the problem was reproducible at certain angles. 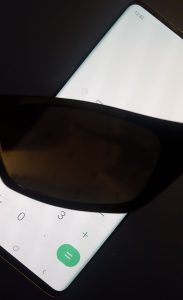 We’re constantly tracking the matter, and will update the story as and when anything newsworthy comes to light. Meanwhile, if you use polarized sunglasses and you own a Galaxy S10, do share your experience with us in the comments section below. 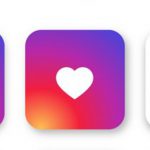 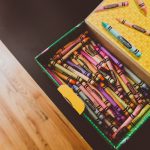