It’s a new day and a ton of news emerging from the Apple ecosystem. The company might be launching its second generation of AirPods as well as two new iPads. In all probability, Apple might be jumping onto the foldable smartphone bandwagon with its alleged plans of creating a self-heating display.

If you thought that’s all, you couldn’t be further from the truth. Sit back and relax as we embark on a journey through the Apple universe.

The first-generation Apple AirPods lived up to the hype and laid the foundation of great expectations from the next generation of AirPods. Rumour has it that the company may be holding a launch event at the end of March with an official announcement of its AirPods 2 on March 29th. However, much of this is based on rumours ignited by a Spanish blog which claimed to have sensitive information about the company’s plans.

The blog which started the rumour backs up its claim with a screenshot of what appears to be taken from Apple’s stock management software that shows the first generation AirPods coming to a speedy halt on March 28th. Here’s the screenshot (click/tap to view full size):

Well, in all honesty, this isn’t just an isolated incident as a rumour suggesting launch of AirPods 2 even surfaced through other sources with one claiming that it would launch alongside the AirPower wireless charging pad, a new affordable iPad and an iPad mini 5.

Considering that Apple’s first generation AirPods were priced at $159, there’s a good chance that its AirPods 2 will be sold at a slightly higher price – could be around the $200 mark. Unfortunately, there’s no conclusive evidence regarding its launch in March so take all this with a grain of salt! Speaking of new iPads, the rumours might indeed have some truth in them as the company has registered two unreleased iPad models with the Bureau of Indian Standards. This news comes straight from MySmartPrice and is even accompanied by an image revealing the two models. While the model numbers A2124 and A2133 have already appeared online via registration with the Eurasian Economic Commission, the Indian filing suggests a rather quick release.

It’s still too early to tell when exactly the new Apple iPad and iPad Mini will be released. However, it’s definitely a good thing given the fact that the tablet market has been stagnant and saturated throughout last year. One of the major reasons for this includes the launch of phablets, and now foldable smartphones which both serve the purpose of a smartphone and a tablet.

It appears that 2019 might just be the year of foldable smartphones. Samsung has also capitalized on this new technology by making its Samsung Galaxy Fold smartphone official. Adding to this list is also Oppo and Huawei with its Huawei Mate X smartphone.

Just a few days ago, the co-founder of Apple, Tom Wozniak, expressed his amazement and fascination with foldable smartphones. While he did confirm that Apple doesn’t have one in the works, he did mention that the company is full of surprises. So with that in mind, we can always expect the unexpected.

A new Apple patent which surfaced online under the title of “Electronic Devices With Flexible Displays” goes into length about how the company may have found a solution to a problem with foldable smartphones. It’s not surprising that smartphone displays are prone to damage when bent and when exposed to cold temperature.

In order to combat this, Apple claims that the portion of the screen when bent could be heated up by pixels on the screen. This would allow the device to fold without the risk of damage. However, this would require some sort of external or internal heating element which Apple has not yet disclosed. A glimpse of the images will give you a brief idea of what Apple has up its sleeve. 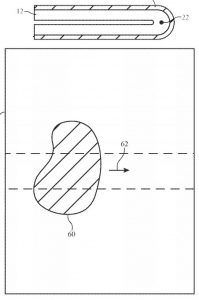 A deeper look into the patent reveals that Apple might make use of a magnetic latching mechanism. Sadly, this is just a patent; an idea which may never even materialize into a reality! Well, it isn’t a sin to be hopeful though! Considering the fact that Samsung and Huawei have made it possible, it isn’t too far-fetched to believe that Apple may achieve the seemingly impossible as well!

Moving on, iCloud is a brilliant service by Apple, but just how private is your precious data kept? While Apple won’t be selling your data, it still has access to it. However, this can all change if the Electronic Frontier Foundation (EFF) gets its way. EFF demands that Apple should implement user encrypted iCloud backup which is only accessible to its users and not to the company or any body of law. On the flip side, Apple hasn’t implemented this as yet because doing so would not allow the company access to restore forgotten passwords. Tim Cook better explains the rationale behind not encrypting iCloud data:

There our users have a key and we have one. We do this because some users lose or forget their key and then expect help from us to get their data back. It is difficult to estimate when we will change this practice. But I think that will be regulated in the future as with the devices. So we will not have a key for it in the future

In other news, International Women’s Day is around the corner and Apple is looking forward to celebrating it. The company plans on celebrating it throughout the month of March in the form of a partnership with Girls Who Code. The company is spreading the love for coding and women empowerment through this brilliant initiative. It’s not unknown that Apple is spearheading the growth of education through its technology. In fact, this initiative is a manifestation of its efforts towards developing and creating educational opportunities throughout the U.S. In the words of Apple’s environmental and social initiatives chief Lisa Jackson:

Women have earned the opportunity to have our ideas shape the future. We’re excited to support Girls Who Code as they empower girls to be the developers and tech innovators of tomorrow.

Finally, an ex-Apple designer has launched a camera app for the iPhone. The app packs quite a number of useful features and reminds iPhone users of the superior image capture quality of their smartphones. If you own an iPhone, Spectre is definitely a camera app to try out!

We hope that this daily dose of Apple news has not only been informative but also interesting and fun to read. Stay tuned for more recent and ground-breaking news from the world of Apple!