Ahem, looks like we are becoming ‘regularly irregular’. @LineageOS, no pun intended! Anyway, let’s back to track.

After the success of OnePlus One, OnePlus needed to pass through many rough waters. Cyanogen OS became defunct so the company hired Paranoid Android team to build their in-house operating system called OxygenOS.

On the other hand, Qualcomm’s first 20 nm ARMv8 flagship SoC – Snapdragon 810 was riddled with major thermal issues. OnePlus played a fine move: they shipped 2015’s OnePlus 2 with SD810, along with a surprise launch of OnePlus X with trusted SD801.

Issues like the absence of NFC and severely crippled SoC made OnePlus 2 the prodigal son. Perhaps the unavailability of official Nougat upgrade for it (even after promising) was one of the biggest blunders done by OnePlus. 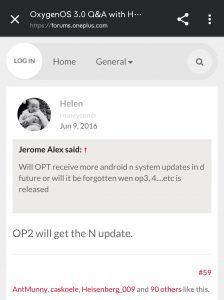 2016’s OnePlus 3 was a game changer though. OnePlus gained mostly positive critical acclaim with OP3 after the controversies with its predecessor. The Chinese OEM also began to release the yearly ‘T’ refresh, starting with OnePlus 3T. This time, OnePlus corrected themselves on the software update front. The OxygenOS team was getting matured, which helped to quickly update OnePlus 3 and 3T from factory installed Marshmallow to Nougat.

2) Android N stable OTA for the OP3 and the OP3T. Gradual rollout will begin later tonight.

Pete Lau, the CEO of OnePlus, subsequently announced that the Android Oreo update would be next.

A lot of you have been asking, so I'm proud to say Android O will come to OnePlus 3 and 3T.

Oreo eventually came with OxygenOS 5.0 tag. After being updated to Nougat, both phones share same update path. Update zips are not unified though.

Having 2 major version upgrades is considered as the end in Android community. But OnePlus surprised everyone by announcing the plan to release Android 9 Pie for 3 and 3T. They skipped Android 8.1 entirely for preparing to bake OxygenOS 9.x based on Android Pie. FYI, OnePlus 5, 5T and 6 have already been updated to Android 9.

The team even stopped Open Beta updates for 3/3T. When asked about it, staff member Manu J. replied that the engineers dedicated complete workforce on Pie bringup. OxygenOS Product Manager Szymon Kopec posted a thread in official forum earlier today. The contents are mainly focused on integrating Google Duo natively with OxygenOS, but he put a subtle hint on the Pie update for OnePlus 3 and 3T.

Don’t you guys think it’s almost there? Will OnePlus One’s record of getting 3 major updates (it started with 4.3 Jelly Bean) finally be broken? Cross your fingers! Shifting back to Szymon’s announcement: we have already seen the Google Duo integration in the changelogs of most recent update for OP6/6T on stable channel.

OnePlus doesn’t plan to completely replace native carrier video calling option (ViLTE). On the other hand, Google Duo has been considered due to its superior performance and universal applicability.

Here’s the latest development in our endeavours with OxygenOS. We’ve set our sight on providing a burdenless experience to OnePlus users. Earlier in 2018, we conducted a research study with OnePlus users in India on video calling capability.

Here, Google Duo ranked the highest in terms of call quality. Following this, we’re now introducing Google Duo as a native function for video calls on our devices and are providing enhanced video calling quality for all OnePlus users.

Now here’s is an interesting theory: OnePlus starts integrating Google Duo with OxygenOS, but still doesn’t ship Messages in favor of their own SMS app. List of OEMs shipping Messages as default (Source: The Verge)

Now RCS (Rich Communication Services) is expanding, and OnePlus partnered with US carriers to sell phones – don’t these factors also indicate that OnePlus will use Messages from Google as their default SMS app in near future? Google Lens integration is already done. 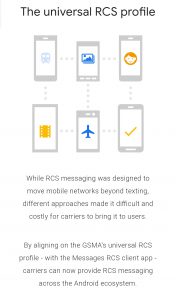 We have discussed the situation in details in this article. Beta testers, who want to be back on stable channel, have to depend on unofficial methods and leaked flash tools to do the work.

No official statement about this peculiar stance has been posted by OnePlus at the time of reporting.

For tinkerers, hold your breath! XDA Recognized Developer HolyAngel got a shiny OnePlus 6T and decided to play with it. You can now enjoy his HolyDragon custom kernel on OnePlus 6 and 6T which enables DTS Eagle audio enhancement. Let’s finish up for today, shall we?